The President of the Republic of Serbia, Aleksandar Vučić, met with the Serbian member of the Presidency of Bosnia and Herzegovina, Milorad Dodik. 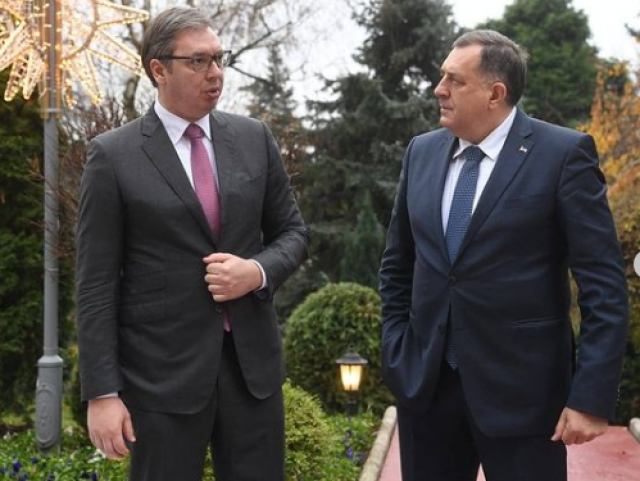 He said that Serbia will not close the border for the people from Republika Srpska in any way, regardless of the epidemiological situation in Serbia and RS, as he firmly believes that relations with Bosnia-Herzegovina must improve, so Serbia will continue to help the Serbian people in RS and demands an end to threats of abolition and disappearance of Republika Srpska.

This was announced by the Cabinet of the President of Serbia after today's meeting of President Vučić with the Chairman of the Presidency of Bosnia and Herzegovina Milorad Dodik, who informed him about political attacks on Republika Srpska, as well as attempts to overthrow it, and made clear demands and requests to Serbia.

According to the statement of the President's Office, Vučić listened to Dodik and asked him to complete his demands, which the President of Serbia considers legitimate, in the days and weeks ahead.

As it is stated, Vučić defines the attitude of Serbia towards Bosnia-Herzegovina and the Republika Srpska in the following way:

Vučić concluded that the Republic of Serbia believes that the relations between Serbia and Bosnia and Herzegovina can and must be improved, primarily through significant economic integrations, connecting people and with a view that is focused on the future, and not on the past.

Vučić also pointed out in his answer to Dodik that Serbia will not close the border for people from Republika Srpska in any way, regardless of the epidemiological situation in Serbia and RS.

"Friendly conversation in difficult and challenging times. The Serbian people are able to withstand all pressures, attacks and political chases, we do not touch anyone, we just want no one to prevent us from being on our own," it was written on the Instagram profile of "buducnostsrbijeav" below the photos of Dodik and Vučić.