Vučić: The most important and most difficult issues are coming to the table VIDEO 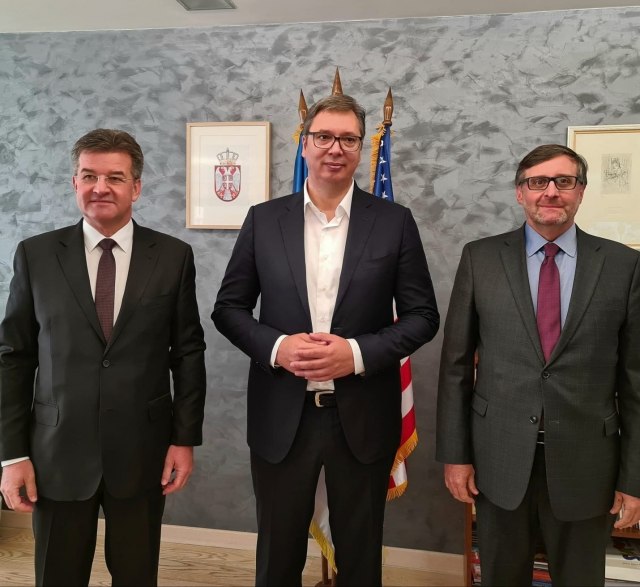 "We had several rounds of talks with EU High Representative Josep Borrell and Miroslav Lajcak, and I think a session or two with Avdullah Hoti. Those talks are never easy for us. At the moment when our government is formed and the assembly starts working, we will raise the issue of Kosovo", Vucic said.

He added that they agreed on the issue of missing persons, internally displaced persons and economic issues, and two topics are open today.

"One of the topics opened is community of Serbian municipalities and negotiations on that issue should be continued by the heads of negotiating teams on September 17, while another meeting at a high level here in Brussels will be held on the 28th. Another topic is the topic of property and financial demands that we extend towards each other, meaning that the most important and the most difficult issues are coming to the table", Vučić said and added that he was not dissatisfied with today's talks.

As he stated, Pristina will, as a consequence of the insistence of the Serbian side, pass a law on the return of displaced persons.

"Pristina will pass a law on the return of displaced persons, which is an important step, although we remain reserved about the results in practice," Vucic said. He also stated that the mechanism of registration of displaced and missing persons and access to all archives has been determined.

As an essential topic of today's talks for Serbia, he stated the abolition of all barriers and enabling the free movement of goods, people, services and capital.

He said that it is extremely important that in the future, there will be no introduction of any taxes or tariffs on either side.

"It is important for us. Many people underestimate it, especially those who live decently and are not interested in such issues, and those are issues that are essential for our country," Vucic said.

He stressed that this would create a common labor and goods market and that it would contribute to progress for the entire region.

He was asked if he would appear in Croatia, at the anniversary celebrations.

"We believe that it is important to have the closest relationship, but we will not force anyone to do that. I cannot look forward to the persecution of Serbs, but I am ready to lay a flower at any place where there were Croatian victims" Vucic concluded.