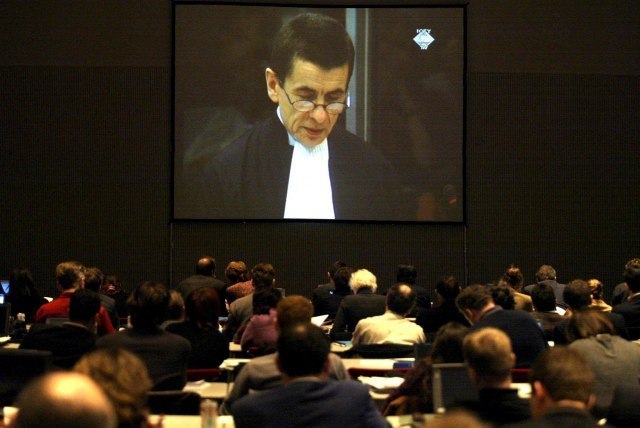 This is according to Branislav Tapuskovic, who at the time participated in the proceedings before the Hague Tribunal, and who now told Belgrade daily Vecernje Novosti that former Chief Hague Prosecutor Carla del Ponte also spoke about this in the past.

("Yellow House case" is the informal term for the allegations that members of the so-called KLA ("Kosovo Liberation Army") were kidnapping Serbs and harvesting their organs - something that was investigated by Council of Europe rapporteur Dick Marty.)

Nice is now back in the public eye, after it was announced he would be defending one of the former KLA leaders Sami Lushtaku, who will appear before the prosecutors of the Kosovo Specialist Chambers ("special court") set up to deal with the crimes committed by this terrorist organization. Lushtaku will appear before the court, also located in The Hague, on January 16.

Another former KLA commander, Rustem Mustafa - whose name is linked to torture and murder of Serbs, the bombing of the Nis Express bus when 12 Serb passengers were killed, terrorist attacks, and showdowns with "disloyal" Albanians - made his appearance before the court on Monday, the newspaper noted.

Nice is going into all this with a great deal of "prior knowledge," the article continued - because he had the opportunity to learn about the events in Kosovo and Metohija as the chief prosecutor in the case against Slobodan Milosevic. However, at the time, he was openly and unapologetically representing the Albanian side, said the newspaper.

"Nice had access to numerous documents, something he would now be able to make use of as a lawyer. He constantly insisted that everything that was going on in Kosovo and Metohija had the purpose of creating 'Greater Serbia' and that Kosovo and Metohija did not belong to Serbia. At the trial, he even claimed that the Serbs had destroyed a 7th century mosque - while the Ottomans (who built the first mosques in the region) came to the Balkans in the 14th century. That's the Nice fellow for you," said Tapuskovic.

According Pristina media, Nice could also act as the defense counsel for both Kosovo President Hashim Thaci and Kosovo Parliament Speaker Kadri Veseli, should they find themselves indicted by the Specialist Chambers.

Following the release of the Marty report about KLA's crimes, Nice worked for Pristina authorities to prepare materials that could be used in the defense of Albanian terrorists before the Specialist Chambers.

During his career, there has been talk of Nice receiving large amounts of money from the Albanian lobby, the newspaper said. Vecernje Novosti cited Kosovo -based media, to report that on his new mission of rescuing KLA terrorists, the British lawyer will be earning EUR 2,200 a day, plus travel expenses.