Serbia, Russia ink deal on peaceful use of nuclear energy

Serbia and Russia on Thursday signed over 20 agreements, memorandums, accords and protocols on future cooperation. 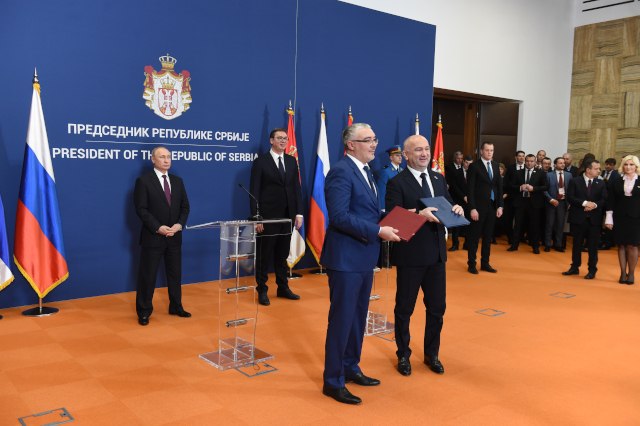 The documents were signed after a meeting of Serbian and Russian delegations headed by Presidents Aleksandar Vucic and Vladimir Putin, during the Russian leader's visit to Serbia on January 17.

Rosatom CEO Aleksei Likhachev and Serbian Minister for Innovations Nenad Popovic initialed an agreement on peaceful use of nuclear energy.

Other major documents include MoUs on Russian-Serbian cooperation in development of digital technologies and innovations in the electricity sector.

An agreement with the Russian space agency Roscosmos on peaceful use and research of space was also signed.

Serbian Minister of Labor, Employment, Veteran and Social Affairs Zoran Djordjevic and Russian Minister of Labor Maksim Topilin signed the Administrative Agreement on Social Insurance, the Protocol on the Exchange of Ratification Charters, the Social Security Protocol, as well as the Memorandum on Understanding and Cooperation in the field of social protection, the Serbian government announced.

An agreement on the increase of capacity of the hydroelectric power plant Djerdap 2 was signed between the Russian company Power Machines and the Electric Power Industry of Serbia (EPS), as well as the Memorandum on Russian-Serbian cooperation in the electricity sector.

A Memorandum of Understanding dealing with the localization of industrial products in Serbia with the participation of Russian companies was signed by Serbian Minister of Economy Goran Knezevic and Minister of Industry and Trade of Russia Denis Manturov.

Also, important agreements were signed with the Serbian Oil Industry NIS, including the Memorandum on Strategic Cooperation with the Moscow State Institute for International Relations of the Russian Ministry of Foreign Affairs.

The list of documents signed also includes the Memorandum of Strategic Cooperation between the Russian State University for Oil and Gas and the Serbian NIS.

In the field of bilateral relations, among the documents signed are the Plan of consultation between the Ministry of Foreign Affairs of Serbia and the Ministry of Foreign Affairs of Russia for 2019-2020, a Joint Statement on cooperation in the implementation of the project for the construction of a regional center for nuclear technologies in the territory of Serbia, the Protocol on the Exchange of Instruments on the Confirmation of the Agreement between the Russian Federation and the Republic of Serbia on social security.

A Memorandum of Understanding was signed between Gazprom Export and Srbijagas for the development of the project of expansion of capacity of the Banatski Dvor underground gas storage facility.

Other documents signed are in the field of gas economy, development of production and distribution infrastructure of pipelines and liquid natural gas, Serbian-Russian cooperation in the field of innovation development in the electricity sector between the Government of Serbia and the Russian power company Rosseti.

Sberbank Serbia signed a memorandum with Telekom, as well as Belgrade University with Saint-Petersburg Mining University.

A Joint statement was signed between the Government of Russia and the Government of Serbia on the establishment and conditions of activity of cultural and information centers, the Memorandum of Understanding between the University of Belgrade and the Moscow State Institute of International Relations - MGIMO University, then the Memorandum of Understanding between the Ministry of Defense of Serbia and Kamaz, as well as many other protocols with Russian companies that came to Belgrade on Wednesday.