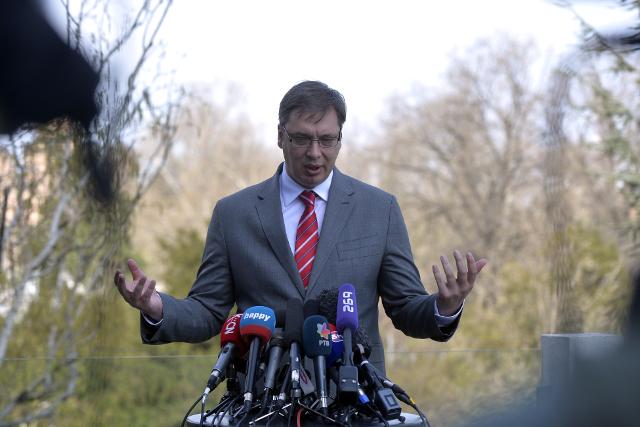 Vucic made the statement when asked to comment on "the latest misunderstanding" between Belgrade and Sarajevo, after some analysts put his "exchange of views" with the Bosniak (Muslim) member of the Presidency, Bakir Izetbegovic, in the context of Serbia's upcoming parliamentary elections.

"I am going to Mostar to represent Serbia - above all the Serbian economy," Vucic said, and, commenting on "analysts and analyses," said he "saw no need to sharpen his rhetoric for the sake of election results."

He said Serbia's position on Bosnia-Herzegovina had not changed, as Serbia continues to respect the territorial integrity of that country, but will at the same time not allow anyone to endanger the Serb Republic (RS) - the Serb entity in Bosnia.

"Serbia hasn't changed. Its policy will not be aggressive but one of peace and reconciliation, rather than the of revenge against another nation. And I'm going to Mostar, I'm guessing it will be interesting," Vucic said.

Commenting on Izetbegovic's announcement of a revision of the genocide lawsuit against Serbia in the wake of Hague Tribunal's ruling in the trial of Radovan Karadzic, Vucic noted that "almost nobody" in the Presidency of Bosnia-Herzegovina "nor in the world" supports this idea, adding, however, that he personally "sensed that the thing was moving in that direction."

In this context, he mentioned "a newspaper" that had printed "60 pages against Karadzic, of which at least 15 were against the RS."

Expanding on his point of "having no intention of changing Serbia's policy of peace that looks to the future," the prime minister said he was "ready to stand in front of the right-wingers and say, 'don't talk nonsense' - because the easiest thing to do is to pander to the people, whine against somebody, which has become a national sport in Serbia, but also in the Balkans."

"Everything I've been saying is rational and makes sense, but I am satisfied that everyone in the world understands how important it is for the circumstances in the Balkans to change, rather than to be going back to the past with lawsuits," he said.

Commenting on the Hague Tribunal's verdict in the case against Vojislav Seselj, set to be announced on Thursday, Vucic said it will be "of no consequence" when it comes to the country's stability.