State of emergency and curfew: National Guard, armored vehicles on the streets PHOTO 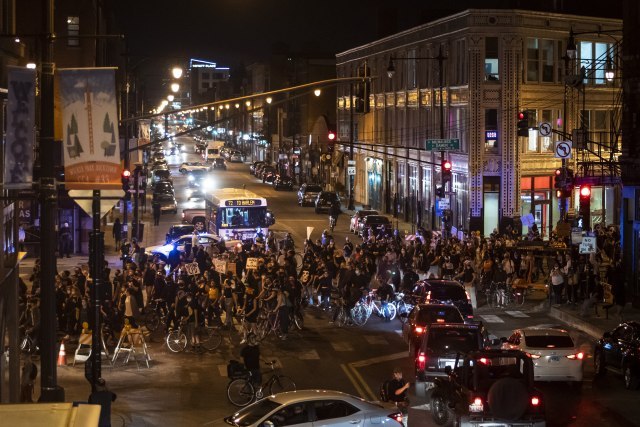 Acting police chief in that city, Robert Schroeder, said that the suspect for injuring police officers with a firearm was arrested, but he did not reveal whether that person participated in the demonstrations, AP reports.

According to him, the policemen were wounded after a shooting took place at an intersection that was blocked by the protesters, and those gathered started to flee in panic.

Policemen armed with rifles were sent to the area, who unblocked the road with the help of vehicles. According to media reports, more than 40 demonstrators were arrested due to the conflict with the police.

A state of emergency has been declared in Louisville and a curfew has been introduced, while the members of the National Guard and armored vehicles are on the streets.

Protests were also organized in other American cities, and citizens dissatisfied with the jury's decision not to file a direct indictment for the murder of Brianna Taylor gathered on the streets of New York, Chicago, Washington, Atlanta and Philadelphia.

In the American capital, protesters gathered near Lafayette Park in front of the White House.

A grand jury in Louisville, Kentucky, accused a former police officer of recklessly endangering life in the case of the murder of health worker Briana Taylor in a police raid in March, but decided that two other police officers justifiably fired in that action and no charges were filed against them.

Detective Brett Hankison has already been fired from the city police after the investigation established that he fired 10 bullets into Brianna Taylor's apartment through a door covered with a shutter, which violated police rules that they should have a clear visual overview of the situation before opening fire, according to Voice of America.

In the three-count indictment, Hankison is charged with "reckless endangerment of life", because the bullets he fired ended up in a neighboring apartment and endangered the lives of three people.

If convicted, he faces a maximum of five years in prison.

Hankison was in a raid with two colleagues when they broke into the apartment of 26-year-old Brianna Taylor and killed her in front of her boyfriend.

The deaths of Brianna Taylor and George Floyd, who died in May after a white Minneapolis police officer knelt on his neck for eight minutes, sparked a wave of protests across the country, demanding justice in racial relations and an end to excessive use of police force.

In anticipation of the court's decision, crowds of people gathered around the park in Jefferson Square in Louisville, the place of regular demonstrations against police brutality.

After the decision to file the indictment was announced, the mayor of Louisville, Greg Fischer, announced the introduction of a three-day curfew, which will begin at 9 p.m.