A powerful explosion erupted near the port in Beirut, the most populated part of the city. 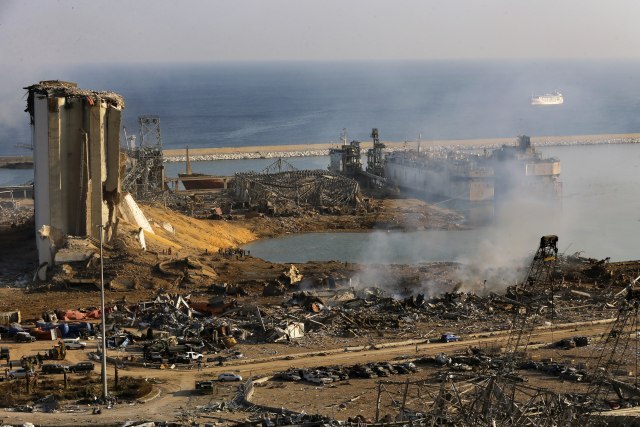 According to the latest data, more than 100 people were killed and more than 4.000 were injured.

The head of the Lebanese security service, General Abbas Ibrahim, denied the version about the detonation of pyrotechnics at the site of the explosion, and stated that these were other explosive devices that had been stored for a long time.

"What happened is not an explosion of pyrotechnics, but some other explosive devices that have been stored for a long period of time," Ibrahim said.

A storage of 2.750 tons of ammonium nitrate exploded in the port of Beirut on Tuesday, causing unprecedented death and damage in the Lebanese capital, Prime Minister Hassan Diab announced.

"It is unacceptable that the cargo of ammonium nitrate, estimated at 2.750 tons, has been in storage for six years, without any supervision," he said at an emergency meeting of the Supreme Defense Council tonight.

"That is unacceptable and we cannot remain silent on that issue," he added, as his spokesman told reporters.

Ammonium nitrate is an artificial fertilizer and also a component of explosives.

"We will not stop until we find the person responsible for what happened," the prime minister promised.

"During the welding of the opening through which the criminals could commit theft, there was a detonation of the cargo stored in the port with 2.700 tons of potassium nitrate - niter," the television reported the preliminary findings of the police.

Arab media reported that the wife and daughter of the Lebanese Prime Minister Hassan Diab were also injured in the terrible explosion.

According to Health Minister Hassan Hamid, the hospitals are full of injured people, so hotels in downtown Beirut will receive patients who do not need surgery.

The part of the city where the explosion took place was destroyed, and a large number of buildings were severely damaged.

The explosion was equal to a 3.5-magnitude earthquake, according to the German geoscientific center GFZ, and it was heard and felt further to Cyprus, more than 200 kilometers across the Mediterranean, reports AP.

Strong signals from the explosion in Beirut were also detected by the stations of the International System for Monitoring the Implementation of the Agreement on the Prohibition of Nuclear Tests in Tunisia and Germany.

The cause of the explosion is not yet known, but initial reports suggested that a large fire broke out in a warehouse in the port and then came to devastating explosions, with a huge cloud of dust and smoke resembling an atomic mushroom that quickly spread through the city.

Abbas Ibrahim, the head of the Lebanese State Security, said earlier that the explosion may have been caused by highly explosive material that was seized from the ship some time ago and stored in the port.

The staff of the German embassy was also injured

That part of the city was destroyed, a large number of buildings were severely damaged.

The explosion was equal to a 3.5-magnitude earthquake, according to the German geoscientific center GFZ, and it was heard and felt further to Cyprus, more than 200 kilometers across the Mediterranean, reports AP.

Hospital facilities were filled quickly, and the injured are still being brought.

It is feared that the final death toll could be even more tragic, as many people remained trapped in the rubble of surrounding buildings, and due to the large influx of injured, hospitals were forced to place minor cases in nearby parking lots.

The explosions caused enormous material damage, the entire port area was leveled, and the impact was so strong that it was felt in Cyprus, at a distance of 240 kilometers.

The staff of the German embassy, which is located near the port, was also injured, and the American embassy issued a warning to its citizens to be informed about the development of events.

They also state that the reports speak of a large amount of poisonous gases in the air at the place of the explosion, which is why it is recommended to wear a mask and stay indoors.

"Many people are listed as missing, their relatives are looking for them, but the search is difficult because there is no electricity," said Health Minister Hamad Hassan.