"It will be known exactly on Wednesday"

For primary and secondary school students in central Serbia, the second semester begins on January 24. 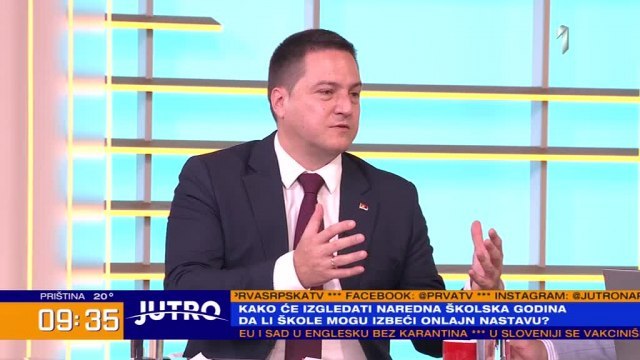 Minister of Education, Science and Technological Development Branko Ruzic told RTS that elementary school students in Vojvodina will directly attend classes at the beginning of the second semester, while high school students apply a combined model - one day of schooling, the other online.

Ruzic adds that the next meeting of the School Team will decide on the teaching model for central Serbia, where the second semester begins on January 24.

According to him, there is no reason to postpone the beginning of the second semester in central Serbia, since by January 11, the share of school-age children in the total number of infected was three percent.

"Since the beginning of the pandemic, we have managed to adjust teaching to the level of sustainability. If the flu and coronavirus and similar complications were combined, the teaching model would be adjusted, but there will certainly be no delays," Ruzic explains.

He states that the meeting of the School Team pointed out that attention should be paid to personal hygiene, ventilation of rooms, the obligation to wear a mask during their stay at school, adding that children have so far shown a high degree of discipline and responsibility.

As for online teaching, Ruzic emphasizes that examples of good practice were shown by teachers themselves.

"Everything that was used last school year is still used now," says Ruzic. As for the faculties where the exam period is underway, the recommendations of the relevant ministry are being followed.

"It is the obligation of every student to take exams at their home faculty, and the combined type of teaching is in force," adds Ružić.