"We will celebrate Easter in our hearts, mostly confined to our homes" VIDEO 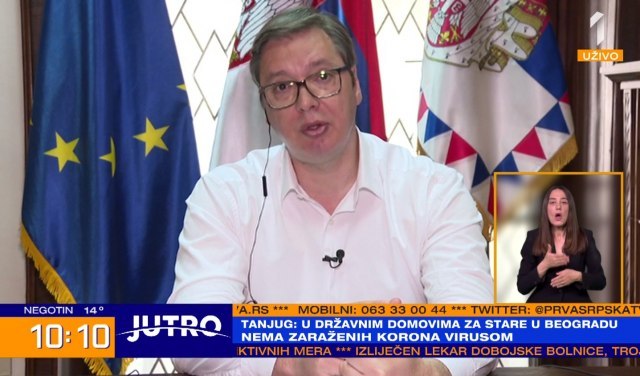 "This is certainly a difficult time, perhaps the hardest in the last two decades. We are fighting a dangerous invisible opponent," Vucic said.

Yesterday, the WHO reiterated that Serbia was keeping the epidemic under control. He thanked them for noticing it.

"The ignorance and unpreparedness of the whole world contributed to the spread of this virus, but I think we did a good job thanks to the expertise and measures that we brought in time even though Serbia was subjected to a severe blow," Vucic said.

He said that today some people die because they waited too long in order to avoid going to the Fair and added: "The hospital is not good, it is better to be at the Fair or Cair than to be in a hospital."

"We had a rough night tonight, we have new hotspots," Vucic said.

"If these hotspots were not present, the percentage would be much smaller. When we put the those places under control and avoid new ones, then I believe that the percentage will fall. We still have a growing number of patients on the respirators", Vucic said.

He noted that it was not Belgrade, but smaller cities, such as Pancevo, Kovin...

He pointed out that he was especially proud of the pensioners because they showed that they were the most responsible part of society. "The job of the state was to help the experts and impose tough and unpopular measures. It is not good for any pensioner to be locked up for 24 hours, but we are saving lives. The second obligation was to help health care and the third to provide goods."

"We need to start worrying about the economy. I've talked to epidemiologists, we need to worry about reducing the number of people on the respirator. I'm optimistic for the first time. The hardest thing will be with the opening of schools, but hopefully we can get started opening of factories and catering facilities first. Strict measures will have to be observed in cafes and restaurants at least one month after the abolition and when the state of emergency is lifted", Vucic said.

When the state of emergency could be lifted and whether the word of the doctors and the crisis staff would be crucial, he said:

"Few people have not responded to this challenge and that small number will be replaced," Vucic said.

During an interview for the Morning Program, he was informed that he would have a telephone conversation with Chinese President Xi Jinping on Tuesday.
Some see conspiracy theories in everything.

The number of migrants does not increase, by a few dozen perhaps, Vucic said, noting that they incur fewer incidents than Serbs.

"We have 8.000 migrants on the territory of Serbia. If they do not respect the measures, our authorities intervene. This is a situation that all normal countries face and solve these problems. But many see conspiracy theories, but I cannot listen to these nonsense. If we are faced with any problem anywhere, we will solve it immediately".

"We will open borders when everyone else does," Vucic replied when asked by a viewer whose family members are abroad. He added that he hoped that they will find a job in Serbia after the state of emergency.

As far as Easter is concerned, the president said: "We will celebrate it in our hearts, mostly confined to our homes and apartments. There will be plenty of time to buy and paint eggs. I spoke with Patriarch Irinej. Religious rights can be fulfilled via television, in order to preserve people's health."

Viewers were able to pose questions to the President at the email address, pitajtepredsednika@prva.rs

About 3.000 questions came to this email addressed to President Vucic.