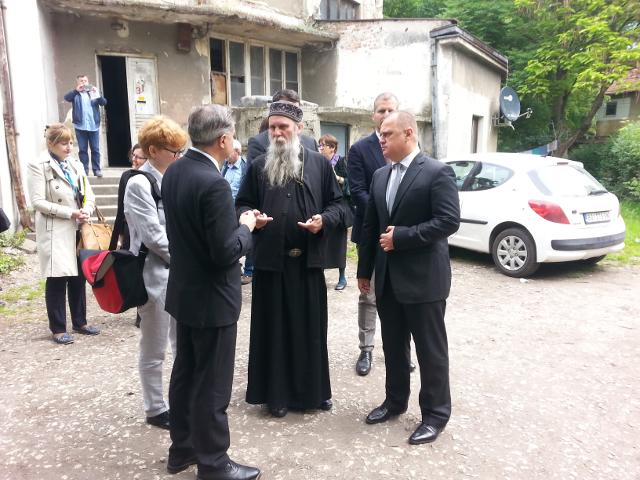 Old Fairgrounds (Staro Sajmiste) was a concentration camp established in 1941 on the left bank of the Sava River in Belgrade by the occupying Nazi German forces.

The city officials today informed a delegation of the International Holocaust Remembrance Alliance (IHRA), led by Ambassador Mihnea Constantinescu, about all the current activities and plans concerning the future shape of the Old Fairgrounds Memorial Complex.

Goran Vesic noted that May 10 marks Day of Remembrance for Holocaust Victims in Belgrade and emphasized the importance of the memorial complex "gaining an international dimension," the city said in a press release.

Vesic further "stressed that the city and the republic (state) invested great efforts to create all necessary conditions in order for Old Fairgrounds to become a place where fellow Belgraders killed because of their different religion can be honored in a dignified manner."

"This is something that was awaited for more than 70 years and this is the best way to pay our debt to those citizens killed in a cruel way simply because they were of another religion," said Vesic.

Serbian Orthodox Bishop Jovan Culibrik explained that IHRA representatives came to Belgrade to highlight the international importance of the future complex and learn what has been done so far.

"Works are expected to start soon, but in the case of Yad Vashem in Jerusalem we see that the building of such an important complex can last up to 50-60 years. Nothing will be done overnight, but there will be steady and concrete steps from one building to another, from one program to another," said the bishop.

Ambassador Constantinescu stressed the importance of encouraging all governments and local governments to be dedicated in their work on this issue.

"Old Fairgrounds represents an important point of our interest and we are encouraged by the determination of the Serbian government to complete this project. It will be a place to commemorate the victims of the Holocaust, and we hope that this commitment to the objective will be achieved, while our organization is ready to assist the authorities in Belgrade so that this space is given its proper purpose as soon as possible," Constantinescu said, according to the statement.