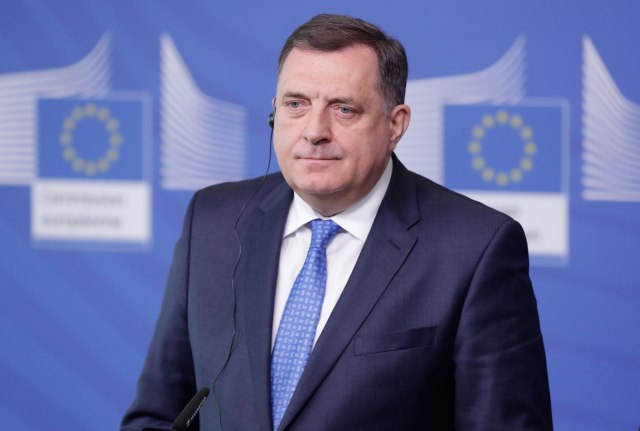 He also said that Republika Srpska has embarked on a path of secession from Bosnia-Herzegovina, a road with no return.

"We will do this and we will not be stopped by the United States or anyone else, because we believe that the Dayton Agreement has been broken, primarily by the intervention of an international factor", Dodik told reporters in East Sarajevo.

He said that time would show how serious Republika Srpska is in that regard, stating that Srpska has a choice between two options, one of which is to allow it to quietly disappear and be destroyed through a "lethal" package made by the international community and Bosniacs' parties in Sarajevo, RTRS reports.

"In the first phase, it was realized through the High Representative and the imposition of a resolution, and now they are doing it through the Constitutional Court, covering it with the story of the rule of law. If it was a rule of law, three foreigners and foreign embassies would not be able to make decisions there", he said.

Dodik added that it is altogether necessary for "Republika Srpska to do what it has to do", Sputnik reports.

"I want everyone in the Republika Srpska to know - we have been pushed against the wall and we now have to decide whether to accept that these false U.S. and Western embassy claims keep us in the story of some principles and essentially undermining our rights, or that the Republika Srpska does what it has to do", Dodik said.

Dodik stressed that neither he nor anyone else has the right to neglect the fact that 29.000 people gave their lives for Republika Srpska and the freedom of its citizens.

"The thing is, we made a vow that Republika Srpska will survive," Dodik said.

He reiterated that Srpska cannot trust Bosnia and Herzegovina.

"Bosnia-Herzegovina is a bad place and a place of no freedom for Serbs and Srpska. If there is no agreement for the parties to leave the Constitutional Court and put it into office, as in all other countries, then there is no Bosnia-Herzegovina. You should bare that in mind", Dodik emphasized.

In light of recent developments in Bosnia-Herzegovina and the Constitutional Court's ruling on the law on public land, which led the Serb-majority leadership to pass a decision on blocking the decision-making process at the state level, Dodik emphasized that it would be best for the peoples of Bosnia-Herzegovina to split up and to create "something that would be a space for free movement of people and goods" since it is not possible to create a state that operates on the principle of two entities and three constituent peoples.

“RS could choose between being drowned within few years through decisions of the Constitutional Court, which constantly rules against its (RS') interests, or to take the path of its independence,” Dodik told Serbian national broadcaster, RTS.

"Whatever they decide to do, they must now know that they have contributed to the launch of Republika Srpska's independence. We will not allow this to happen, this is the red line that has been crossed. The Bosnian Constitution clearly and explicitly prescribes the competencies of Bosnia-Herzegovina, and it does not state anywhere that property falls within its jurisdiction”, Dodik said.

Dodik concluded that he would discuss the issue with the President of Serbia and ask for Serbia's understanding for the situation that Republika Srpska is currently facing, adding that the Constitutional Court of Bosnia and Herzegovina is destroying the status of Republika Srpska within Bosnia-Herzegovina.