RS President Milorad Dodik says all conditions have been met to publish a decision on an upcoming referendum in the Official Gazette. 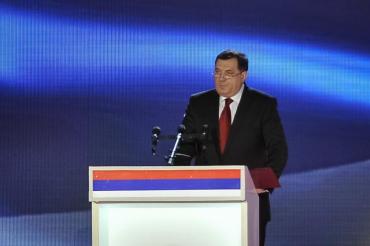 The entity's public broadcaster RTRS quoted his statement made for Alternativna TV that the decision would be published "when the time comes."

"It will be published, citizens have faith in what we are doing, and we will choose a moment that is important for a number of reasons," Dodik said.

The RS leader added it was "important that the referendum has been supported by the Russian Federation - but it now needs to be explained also in some other places."

According to him, High Representative in Bosnia-Herzegovina Valentin Inzko was protecting the unlawful acts of high representatives at the UN Security Council.

"I believe we will succeed in explaining this to some, but if we don't, we will go to the referendum, regardless of the threats at me personally," Dodik said.

Asked about "official Belgrade's position on the referendum," Dodik replied that Serbian PM Aleksandar Vucic said he "thought the moment was not right" and asked him "to reconsider once again."

Dodik warned of "dramatic divisions" between the authorities and the opposition in the RS when it comes to "the political showdown with the Court and the Prosecution of Bosnia-Herzegovina."

"There is no 'day after,' there is decision day. If people say in the referendum they don't support that, then it will be clear a decision has been made, that those who do not wish to implement people's decisions did not want to be a part of the majority for the referendum," Dodik has been quoted as saying.