"The whole world jumped on me, they wanted Serbia to get nothing"

When I spoke about the demarcation between Serbs and Albanians, I think it was a very rational approach, President of Serbia, Aleksandar Vucic stated today 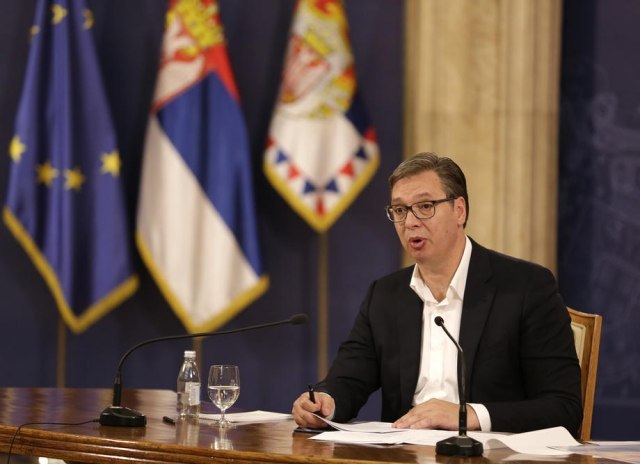 "However, the whole world jumped on me, because they did not understand how much courage it takes to say something like that," Vucic added.

He said that in an interview for the "Pavlovic Tudej" portal (Pavlovic Today), based in Washington, commenting on the recent statement of John Bolton that there was an idea of dividing Kosovo, and added that he asked for that one thing because too many Serbs are suffering.

The President of Serbia also spoke about the meetings in the White House with Robert O'Brien, Gerard Kushner and Richard Grenell.

"For the first time, we talked about everything that is happening to Serbs and Serbia in an unbureaucratic atmosphere, about things that you usually just write reports about and no one listens to you," Vucic emphasized.

He explained what an ideal President of Serbia would be from the point of view of Europe.

"You can talk to European officials as much as you want, but they do not hear you. They have their own agenda, so the ideal President of Serbia would be the one who will accept all their demands under pressure and blackmail," Vucic said.

When asked how he maintains the course and stability of the country, internal balance and focus, while going through various types of storms and turbulence in the historical moments of decision-making, Vucic responded:

"I'm a political veteran, experienced enough to believe I'm used to it all. But what surprised me every time, even when I thought I had been through it all, saw it all, it is the fact how quickly some people I've helped so much can become disloyal ", Vucic revealed.

What is surprising is that this is my fifth time going through this and I still can't get used to the idea that any of it is normal. "I can't get used to the fact that loyalty seems almost non-existent and that gratitude is so short-lived between people and political partners," President Vucic explained.

What seems to be main problem in the talks in Brussels on resolving the Kosovo situation?

Let me define it in one sentence. The only overall solution Albanians see is a full Serbian recognition of Kosovo's independence. What we are trying to do is change the atmosphere in the relations between Serbs and Albanians in Kosovo and Metohija. We want to have better relations between the two largest populations in the Western Balkans. We want to facilitate free trade, movement of goods, services and capital, but when we talk about it, Albanians say: 'Yes, for sure, we want it all, but we want it all to pass through the Republic of Kosovo". And that is bottom line. It is becoming clear that it is not about free trade; it is not about the economy; for them it is all a matter of status. All the time it is. It is an essential problem: through every single conversation, Albanians are into Kosovo's status, nothing else.

That is a problem for us, but let me be very pragmatic and simply answer your question. When we negotiate with Albanians, whether through the European Union or through the Americans, Albanians are looking for a way to achieve Kosovo's independence.

I liked the ideas proposed by the Trump administration, Grenell's proposals for the economy and what we signed. Unfortunately, Albanians do not seem to be in a hurry to implement this agreement. "No agreements on flights, nor on other things," President Vucic revealed.

Our approach, I would say, is quite rational and pragmatic, while their strategy is to think that we are all obliged to fulfill all the requirements they have, all their wishes. And if we do not do that, then we are "followers of Milosevic's genocidal regime." That is something I have heard more than a thousand times in every place", Vucic said.

The meeting we had at the White House with Robert O'Brian, Jared Kushner and Richard Grenell, was great. I could hear many things from them, but these people, who are the most powerful in the world, listened to me for an hour and a half. For the first time, I talked about everything that actually happens to Serbs and Serbia in a non-bureaucratic atmosphere where you usually write reports and official letters and nothing else. I am very happy that such a conversation was possible".

"I will always bear in mind that the people from the White House wanted to hear the views of Serbia, regardless of whether it is in line with what they think. That is at the core of my attitude towards the Trump administration. When Biden came to the meetings, he was always well prepared, but he has his own policy he strictly adhered to. That policy has not brought much happiness to Serbia in the past", Vucic said.

"We really need to talk to the EU, and the agreement must be achieved under the auspices of the EU, because that is the decision of the United Nations Assembly. That is why we supported that dialogue. Without illusion, the talks in Brussels are not a consequence of our desire to talk, but their desire to exclude Americans."

"I don't want to get into those big games now. We're too small to interfere in the complex relationship between the EU and the United States. Let them do their job and we'll do ours. We'll never turn anyone down or shut up. We'll talk to everyone and have a reasonable discussion", Vucic confirmed.

When asked what are the chances of Trump visiting Serbia any time soon, President Vucic responded:

"I can't know for sure. Trump is the leader of the greatest power in the world. It is important to me that I maintain good relations with all his people. I would like Trump to visit Serbia. That is my wish, my great hope. Now I say it openly. I would like to improve the Serbian-American relationship, because it is of vital interest to Serbia. I also think that building our relationship would not be contrary to American interests and is of great importance for our country," Vucic said.

Recently, John Bolton said that there was an idea about exchanging land between Serbs and Albanians in Kosovo and Metohija. So, is there a possibility of dividing Kosovo or is it completely out of the table?

"When I spoke about the demarcation between Serbs and Albanians, I think it was a very rational approach. I will remind you of what I said then that Serbia will always be asked to make huge concessions. Then the whole world jumped on my head. They didn't understand how much courage it takes to say that. Today I understand why they did it. They wanted Serbia to get nothing. I asked for this only because so many Serbs suffered. I said: "Balkans to the Balkan peoples, let's talk , let's make a deal. But, no one ever wanted to allow us to talk and reach an agreement", Vucic revealed.

I am proud to be ‘guilty’ of making this mistake. That will be written in history. I was the only one who opposed all the preconceived plans of many Western countries. I offered something that would be a compromise solution, and no one wanted that. Although we don't talk about it anymore today, I would like to see how they will manage to find a solution. I'm just waiting to see how they think they can come to a solution and decide what they should propose to Serbia, so that Serbia can accept. I haven't heard yet. Nobody told me. I don't understand what they plan to do", Vucic remarked.

In the next four years, Serbia can complete the negotiations on joining the EU and can also become incomparably more developed than it is today. Serbia can become a country with the most developed road and railway infrastructure in this part of Europe. By 2025, we can reach an average salary of 900 euros, which would prevent a significant number of Serbs from emigrating. I believe that we can be a strong and successful Serbia that is not afraid of success, and I know that we can be as successful in our economy as in basketball, water polo, volleyball, tennis and many other sports", Vucic said describing his vision of Serbia on the world stage.

The position of the White House re: Kosovo

In response, President Vucic gave a brief insight into Democratic presidential candidate Joe Biden in the context of the Kosovo situation.

"I think Biden understands the situation in Kosovo and Metohija. He knows that very well. I believe there is another reason, and that is that Biden, and I know him well as I have met with him three or four times, has his own agenda. He participated in everything that has happened in Kosovo and that is their political legacy. He wants his policy to be fully implemented, in the same way as it was before with Madeleine Albright and everyone else.

That is why it was important to achieve special changes in the attitude of the White House, first of all, to have another open approach towards Kosovo and Metohija. There, Trump, through his representatives, showed a more open approach and showed, if nothing else, that he is interested in hearing what we have to say. I can't say that Grenell agreed with all our proposals, but at least we were able to present our ideas and plans, and we weren't forced to talk only in a way that fulfills US interest. That is why I am grateful to President Trump and his associates", Vucic revealed.