"Russia wants disorder"; "Agreement between Belgrade and Pristina is possible"

Special U.S. Envoy for the Western Balkan Matthew Palmer stated that he is convinced that agreement between Belgrade and Pristina can be reached 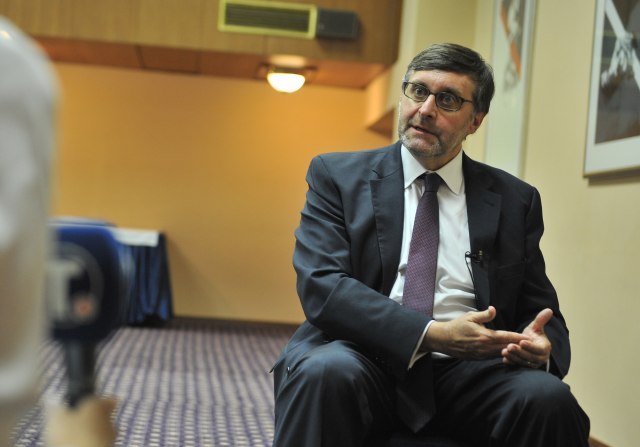 He added that United States would back the Government in Pristina as it is devoted to dialogue, while Russian wants the region based on disorder and mistrust.

"One of our primary goals is to support the formation of Kosovo Government that is devoted to dialogue, which means suspending tariffs and returning to the negotiations table", he said in an interview for RTCG.

He said that the negotiations should be serious, resulting in a comprehensive agreement on normalization of relations between Belgrade and Pristina.

"It would be ideal if it could be done based on mutual recognition. Once when both sides return to negotiations table, we would be partners in quest for the agreement that would be acceptable to all sides, permanent and fair, that would help Serbia on its EU path", Palmer said.

He added that the whole region depends on this issue, saying that he doesn't believe that the disputes between Belgrade and Pristina could affect the European path of other countries.

Palmer said that "Russians are in force in the Western Balkans" and that the US has a fundamentally different perspective of the region compared to Russia.

"We see the Western Balkans as a member of a family of Western countries, integrated in Euro-Atlantic institutions, as countries that cooperate on the basis of rules and norms. The Russians have indicated that they want a region based on disorder and mistrust. I think we saw it most clearly in Montenegro when the Russians supported the 2016 coup, which was an outrageous move to prevent Montenegro from joining NATO and the West,", he said.

Asked if he thought it was possible for something like that to happen again, Palmer said he had no information that could lead him to believe that something like that could happen again. "However, I don't think that the Russians had finished with putting efforts to cause problems in Montenegro nad in the Western Balkans, and we see that throughout the region", Palmer concluded.

He said that it is realistic for Northern Macedonia to become NATO member in December, although it is quite an ambitious goal. "There are still a number of members that need to ratify the accession protocol, including the US. That requires an internal procedure in the Senate and we hope it will be completed by December. If all that doesn't happen then, it will set another deadline, in a few months, however, I am convinced that Northern Macedonia will soon become the 30th NATO member", he said.

Asked how he sees the future of Bosnia and Herzegovina, he said he believes that agreement on the formation of a new government can be reached quickly in Sarajevo.

The US Special Envoy for the Western Balkans also believes that the government and the opposition in Montenegro will agree on electoral conditions and that the opposition will participate in the elections next October.

"I hope that progress can be made. Unfortunately, the opposition does not participate in the work of parliament, which is a fundamental institution and the pillar of democracy. It is important that they understand this responsibility and return to parliament and represent the interests of the citizens who have given them confidence, as soon as possible”, he said.

He also said that the US shares the EU's opinion in the latest report when it comes to reforms implemented by Montenegro.

"Montenegro has made significant progress, but it will have to do much more, especially in the fields of media freedom and the rule of law. We would like to see successful legal proceedings against those who attacked journalists, including Olivera Lakic, who is an international award winner”, he said.

According to him, it is especially important for Montenegro to make progress in chapters 23 and 24, which focus on the rule of law, in order to close the chapters it has opened on its way to the EU.

Palmer reiterated that with this visit, he sends an important message to the region that if they work hard and implement reforms, they could move forward.