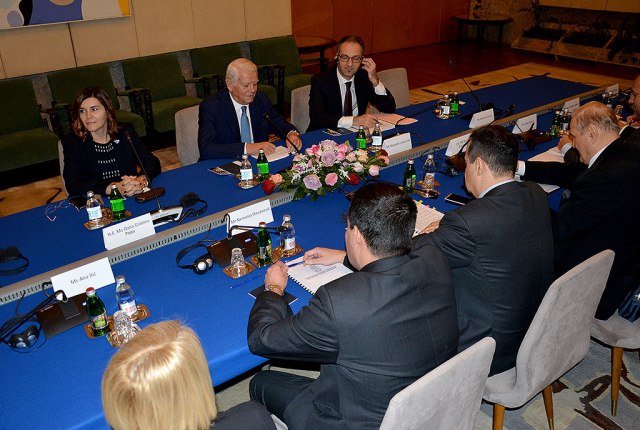 According to the Serbian government, Dacic thanked Melescanu for attending a joint press conference after his meeting in the Palace of Serbia, "because he came to Serbia only a few days before Romania takes over the EU Council Presidency."

He pointed out that relations between Serbia and Romania are "very friendly."

It is important for us to make progress as fast as possible in the process of Euro-integration, and we hope that the number of chapters when Romania takes over the presidency will be greater than we have been opening so far, he said.

The first deputy prime minister also pointed out that the next year marks a significant jubilee, 140 years since the establishment of diplomatic relations between Serbia and Romania.

"Our political relations are rising. We are interested in continuing cooperation and developing it in all areas of common interest. The volume of trade is EUR 1.5 billion, and we expect it to be even bigger," he said.

Dacic said that Serbia highly appreciates Romania's position on the territorial integrity and sovereignty of the country and thanked Romania for not voting recently for Kosovo's admission to Interpol.

Melescanu stressed that his country fully supports the European path of Serbia and invited Serbian officials to maximize their engagement in European integration.

"I assure you that we will place the Western Balkans among the highest priorities of the EU presidency," Melescanu said.

He also pointed out that the very fact that he came to Belgrade, on the eve of the takeover of EU presidency by Romania, speaks of how much his country attaches importance to the relationship with Serbia and its Euro-integration.

"It is in our interest that the Western Balkans become part of the EU," he said, adding that it is important to continue the European path of the region, and that the EU remains committed to the region's rapprochement.

Romania's foreign minister said that there was never a better time to carry out reforms and offer Bucharest's technical assistance in adapting to European standards.

Melescanu also pointed out that economic ties between Serbia and Romania are strong, that trade is almost at a record level, adding that there are opportunities for large joint infrastructure projects in transport and energy, as well as cooperation on border security.

Prime Minister Ana Brnabic also received Melescanu, and, according to the Serbian government, "agreed with him that the two countries are linked by traditional friendship."

Brnabic pointed out that Serbia is aware of the fact that the condition of stability, progress and economic development is a solid link with its neighbors, among which Romania takes a significant place, expressing gratitude to the country for its support.

He emphasized that Romania will also continue to support the territorial integrity and sovereignty of Serbia and the continuation of the dialogue between Belgrade and Pristina, believing that resolving the issue of Kosovo is essential for the stability of the region.

Commenting Pristina's decision to increase the tax on imports of goods from central Serbia and Bosnia-Herzegovina to 100 percent, Brnabic reiterated that Belgrade will not return to the dialogue until the withdrawal of this measure, which is a violation of the CEFTA agreement, but also all agreements reached by the Brussels agreement.

Melescanu stressed that Romania wants even better economic relations and development of regional cooperation with Serbia, as an important partner in the region, and expressed his satisfaction with the latest indicators of significant growth in commodity exchange.

The officials estimated that the quadrilateral meeting of Serbia, Romania, Bulgaria and Greece, held in Belgrade this month, is very important for improving the cooperation of these four countries, but also for promoting stability, security and development in the region.

Also, they emphasized the importance of the construction of the Belgrade-Timisoara highway and the reconstruction and modernization of the railway infrastructure between the two countries.