KFOR's obligation will be to disband Kosovo army - Vucic

Aleksandar Vucic said in the town of Trstenik on Thusday that Pristina's intention to form an army is based neither on law, nor on (UNSC) Resolution 1244. 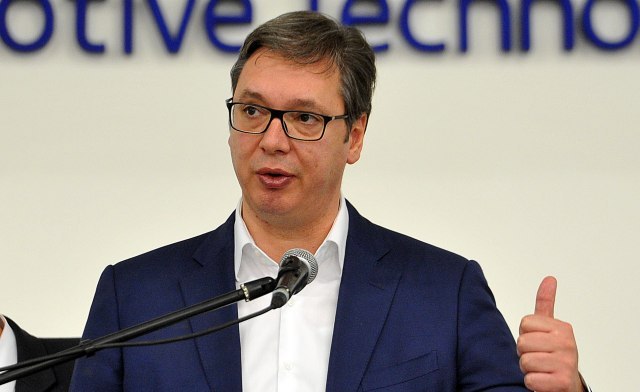 The Serbian president added that it was KFOR's duty to disband that army.

"Kosovo and Metohija is to us great torment, especially because of Pristina's move and the announcement of the formation of an army, which is neither based on law nor on Resolution 1244. KFOR's obligation is to dissolve that army. But, they will not do that, they will say that everything has changed since (Pristina) declared independence," Vucic said.

He added that "this brings us into a very difficult situation, but I tells all mothers that we will do everything we can to help the people in Kosovo and Metohija and preserve peace."

"Everything we can," he told Trstenik residents during the opening of Amphenol Automotive Technology's factory there.

He sent another message, as he said, "to the world."

He said that he would speak more about the topic "tomorrow or the day after," as he is waiting to see what would happen in connection with the announced formation of Kosovo's "army."

"But to be clear. Everything Pristina is doing it is obviously doing with the support of the United States. They have no right under any international legal document to form armed formations, to us, that's illegal, and we will inform the public about further steps," he said.

According to the president, "Serbia is in a difficult situation, but will try to preserve its face as well as to try to protect its children and not enter into conflicts."

"I hope that others have enough reason and brains not to think that some kind of a solution by weapons is smart and good," concluded Vucic.