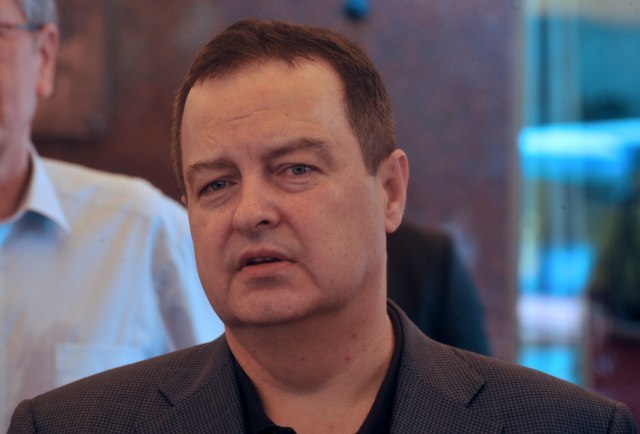 Reacting to the demands of Kosovo PM Ramush Haradinaj for starting work on making a border between Serbia and Kosovo Dacic said that there was no border between Kosovo and Central Serbia but only an administrative line so the demarcation could not happen.

"That's nonsense, they are out of touch. I don't want to offend them but they're not keeping up with what's going on in the world. They celebrate Clinton's birthday, but big changes have happened in international politics. Kosovo is a fictional tale that doesn't exist in the reality of international politics.", said Dacic.

Other topics Dacic talked about included relationship with Russia, compulsory military service and also the controversial exhibit in the Serbian Cultural Centre in Paris.

The Foreign Minister spoke about the meeting with the Russian FM Sergey Lavrov noting the meeting was dedicated to the Kosovo issue.

"Russia is our strategic partner. We had and we will continue to have their support always. We can't defend ourselves without Russia and we won't have any dialogue without Russia's support", Dacic said

When asked to comment on the reinstating of the compulsory military service, Dacic said he belonged to a generation who served the military and that he wouldn't abolish regular military service, because once you did that, it was hard to bring it back.

Dacic also commented on the controversial sculpture of Mickey Mouse and Donald Duck in Serbian Cultural Centre in Paris.

"Cultural Centre is a part of the diplomatic network and the Ministry of Culture and Information has jurisdiction over it. The program originated in the Ministry but that particular scene didn't have to be put next to the White Angel. That's scandalous. Measures have been taken, but you can't talk about them until after they're implemented", Dacic said.