Serbia will have a good government - but the conditions set before it will be such that the country will never join the EU, says Dmitry Rogozin. 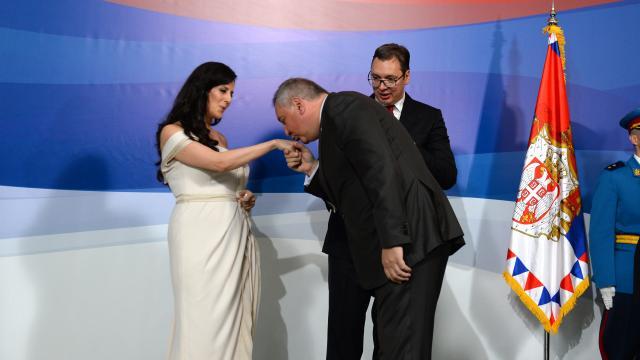 The Russian deputy prime minister spoke for Sputnik after attending Aleksandar Vucic's presidential inauguration in Belgrade on Friday, to also describe Montenegro's recent NATO entry as being directed against Serbia, rather than against Russia.

Speaking about the inauguration, Rogozin said it was important that "all Balkan leaders came to Belgrade on this occasion - it emphasized Serbia's role as the biggest and most authoritative state in the region, on which much depends."

He also commented on the positions held by US officials who are opposed to Russia's influence in the Balkans, especially US State Department official Hoyt Brian Yee, who also attended the inauguration, and who in May described that influence as "malign."

"I have absolutely no interest in what somebody over there is saying. You see, if I listened to everyone saying some nonsense, I wouldn't sleep well. So I don't," Rogozin said, and added that this was the first time he heard about Yee, and dismissed his statements were "nonsense."

In the context of the narrative about Russia losing in the Balkans, Rogozin commented on statements made by US Senator John McCain - who he said "went crazy a long time ago." Rogozin remarked that he in the past met with McCain and knows him - "I told him everything I think back then and since then, it makes no sense to comment on anything."

As for Russia "missing the opportunity to halt NATO's influence in the Balkans," this member of the Russian government said he thinks Montenegro is to Serbia what Ukraine is to Russia, and that Montenegro's NATO membership was essentially directed against Serbia rather than Russia - "more precisely, a conflict has been caused between brothers and sisters."

He accused the Americans of "sowing the seeds of hostility" because they need to have wars - as wars are profitable.

Asked "what kind of government he expects from Serbia" Rogozin replied, "you will have a good government, but the conditions will be such that Serbia will never join the EU."

"First of all, how could they accept you to where others are fleeing from. They have a scandal over there. The English are leaving, while they're convincing you to go to the EU. They don't like it, but they want you to like it. That's not done. Something's wrong there. As they say, 'God gave you what I don't want for myself'," Rogozin remarked, and added:

"When it comes to conditions for Serbia's accession to the EU, you will have to renounce Kosovo. You will never do that. Not the most pro-Western Serb will ever betray their fatherland. One can discuss the economy, the exchange rate, taxes, but that (Kosovo) is a question of treason. And without renouncing Kosovo, the Serbs will not be admitted to the EU."

According to him, the accession process will be long, as in the case of Turkey. Alternatively, Serbia will be broken up, "and then the pieces will be admitted one by one."

Rogozin is convinced that "a game" to draw Serbia closer in currently ongoing between the EU and Russia. But, he then continued, "there's really no game" - because Russia and Serbia "will always be together, while it's important to Serbia to have good relations with European states."

"Serbia can have them without joining that spa," he concluded.

Rogozin also announced that Russian MiG-29s would soon be delivered to Serbia, and advised the reporter to hear from the Serbian president when exactly this might happen.

"I would tell you, but we agreed he should. It's not just the MiGs, but many other things... tanks, transport planes. This is serious and large assistance," he has been quoted as saying.

Rogozin then spoke about the Russian-Serbian Humanitarian Center, to say that it was established (in 2012) in order to avoid transporting personnel and equipment from Russia each time there was a need to fight fires, and instead do this from Serbia. Another reason was the need to create a demining center in the wake of the wars in the Balkans.

The Russian government official revealed that he "does not understand why the US is so afraid of this humanitarian center" which he said was staffed with "several Russians, cats, and dogs."

"There's two cats there and several dogs whose loud bark is heard all the way to Kosovo. In addition, four members of the civil service who are about to retire represent an incredible threat to America's state security. We didn't need the Center in this format, we thought they needed it because of the constant (wild)fires, and then they run to us and plead for help. And now they're saying it's terrible that a dog is barking. Idiotic," Rogozin said.

As for the Center's status - "it has been said that a decision will be made and we await it," he remarked.

Speaking about the possibility of building an air defense and anti-missile defense shield in Serbia, Rogozin observed that such a thing would "kick up a mighty dust."

"If they fear three dogs, imagine what would happen, pardon the expression, they would soil themselves - why bring them to that state. We'll be doing everything in our own territory," Rogozin said.

He concluded the interview by saying that Russia "cannot be spoken to with the help of sanctions" and that it was clear to him that, in the West, the Serbs are seen as "the Balkan Russians."

"And there's no way you can change that. No matter how much you try to get them to like you, they will never like you. One needs to be who one is, respect one's ancestors, one's Orthodox faith, hold one's own truth. The world only respects people like that, trust me - as Serbs and as Russians," said Rogozin.