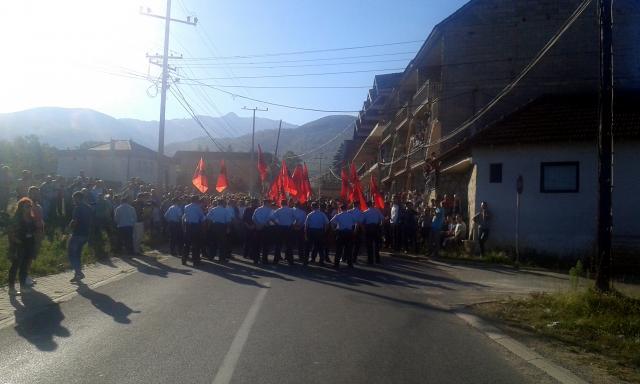 But after waiting in their buses for four hours, the Serbs had to turn back and mark the village feast day in the Zociste Monastery, as Kosovo police and demonstrators clashed in Musutiste. According to Tanjug, at least one demonstrator was injured.

Director of the Serbian Government's Office for Kosovo Marko Djuric said the outpouring of extremism and hatred toward Serbs spoke about the security situation in Kosovo and Metohija being volatile, and blamed "numerous members of the Albanian political elite" as being the most vocal ideologists of this hatred and extremism.

Djuric's deputy, Dusan Kozarev, was on Sunday with another group of Serb IDPs that went to the town of Djakovica to celebrate the Orthodox feast of the Dormition of the Mother of God. According to Kozarev, a group of Albanian extremists attempted, but failed to prevent them from reaching a church in this town.

He also told Tanjug that the police detained "two or three" of those protesting, but that "hatred today failed to score a victory against Christian values."

Reacting to the events in Musutiste on Sunday, Kosovo President Hashim Thaci said that the scenes were "completely unnecessary and unacceptable" and called "to respect the right of everyone to return to their properties."

He also said in a statement that "everyone has the right to return to their country of origin, to their property regardless of ethnicity."

“The issue of the missing, the displaced, and occupied properties are open wounds from the war. We must close these wounds as soon as possible and face to the future”, said Thaci, adding that "the future is in peace, dialogue and cooperation."

According to Thaci, violence has no place "in the new Kosovo," while "justice will deal with all those who have committed crimes in the past, since justice is a prerequisite for a sincere reconciliation and for the building of a multiethnic Kosovo."

The Kosovo government also reacted to the incidents to say it "deplores them."

"Kosovo government fully respects the right of all citizens to peaceful protest, for any reason, we reiterate peaceful, as basic and inalienable right of expression of opinion and the public demands. Also, the government of Kosovo considers that the requirements of citizens for full investigation of all war crimes and punish all perpetrators of these crimes is entirely legitimate," said a statement, adding:

"However, the government of Kosovo considers that every citizen of Kosovo, regardless of ethnicity, is perfectly entitled to return to his property, unimpeded."

The statement added that this was a right guaranteed by the Constitution of Kosovo, "with all laws, international conventions but is in accordance with tradition, the will and the vision of the people of Kosovo for peaceful coexistence, whereas, persons who committed war crimes during the war must face justice individually."