BELGRADE -- A prominent Democratic Party member, Branislav Lecic, said "a creditor who voluntarily wrote off interest rate" has the crucial word in the party

BELGRADE -- A prominent Democratic Party member, Branislav Lecic, said "a creditor who voluntarily wrote off interest rate" has the crucial word in the party 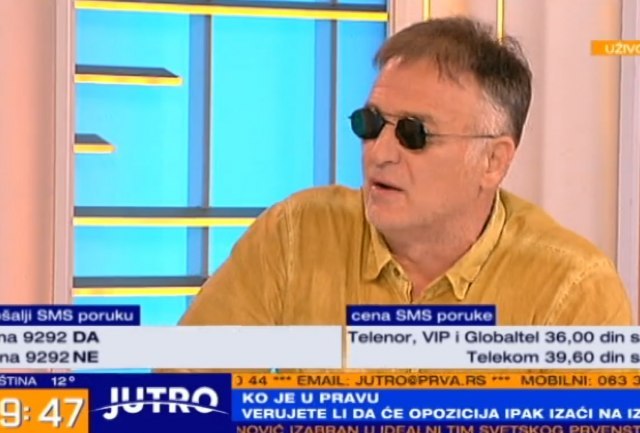 "The voluntary write-off of the interest that is legally owed to the creditor has its price. That price is paid by DS that is just being delivered to him", Lecic said in an interview for today's "Blic".

Lecic points out that the DS is not for sale and that Democrats - party members and legitimately elected party bodies - must lead the party.

He indicated that the Advisory Committee and the Statutory Commission of the party could not be replaced with the ad hoc elected commissions, adding that those who were in them were not even aware that their willingness to help DS had been misused.

He also said that at a recent session of the Main Board which he left with several other colleagues, because he was not allowed to talk, when he wanted to tackle the following issues: the situation in the party, in what way hundreds of thousands of euros were spent, for which Dragan Djilas claims that he paid into the Ljuba Davidovic Foundation, including the reasons for which the process of unification within the party failed.

"We cannot allow the spirit of thinking people in the DS to be broken just for the sake of preserving the majority on the Main Board. It is a crime", Lecic said.

When it comes to the dissolution of Youth DS and other committees, he says that youth cannot be manipulated and that their reaction is always core value and a backbone of the organization.

"With youth like this, we have a chance to survive", Lecic says.

He also said that the DS would not have come into this situation if it had been elected president and if it didn't allow itself to become a "clone of other parties" where there is no democratic decision-making process.

Speaking to DS president Zoran Lutovac's remarks that he is pursuing a "policy against the party in the Vucic media", he says it is unfortunate that a doctor of science allows himself to use such a "provincial, argumentum ad hominem vocabulary".

Lecic points out that he is honored to be part of a party that did some of the brightest things that have happened in Serbia, but that he finds it very disturbing that the label "DS is not for sale" obviously no longer stands there.

The path to the party's recovery is to overturn, he says, strident political decisions made by the Statutory Commission and the return of democracy to the party by open discussion with all party bodies. As far as the boycott of the election is concerned, it is not a good decision as a goal, but as a tool.

"The problem is that a boycott is no longer our goal. Our goal is to declare a boycott right now", Lecic says.

He also fears that the DS might disappear completely after the election.

"Whoever thinks that party infrastructure can survive without budget funds, he has no idea about the functioning of the state or intentionally tries to hide something", Lecic pointed out.

He also said that there are much bigger problems than the DS in Serbia at the moment, such as dysfunctional institutions, disenfranchised citizens, young people leaving the country, political affairs ...