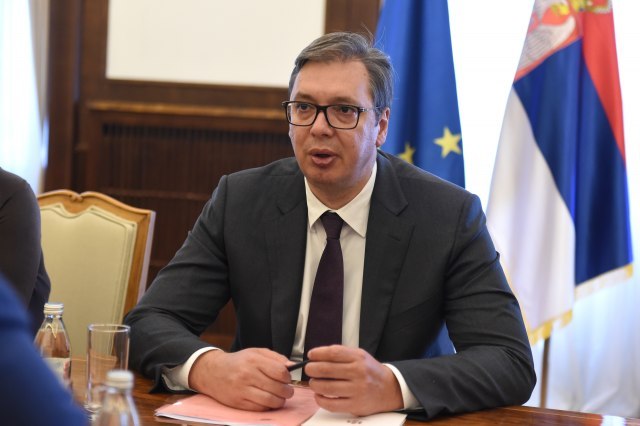 According to him, the things cannot be solved if no one wants to give up anything.
“I asked for understanding that it cannot be resolved as we all would like to be resolved, but that it has to be something in between,” Vucic said.

He added that every Serb and Albanian understands this as well, but that we often "play dumb", undermining the requests of the other side. "Reaching compromise is not a weakness, it is strength", Vucic underlined, adding that he will always pledge for the real compromise, rather than surrendering and giving up.

He said that we will procede in this direction if possible, if not, some future generations will do that, but we do not want to live in constant fear of future wars and conflicts.

“People ask why Serbia is buying arms, well, the answer is we buy it to deter anyone from attacking us. If they see Serbia is a rotten apple, everyone will easily take it, but if they see it like a nut, it’s not easily broken,” Vucic concluded.

Vucic said that the next Belgrade-Pristina meeting will be held in Paris, probably in September, organized by the French President Emmanuel Macron.

French President Emmanuel Macron announced his engagement in arranging a special meeting of Belgrade-Pristina delegation in the presence of German Chancellor Merkel.

Serbian President also stated that we have to change and evolve, in order to overcome the general standpoint that we are God-given, while all the others are against us.

After a meeting with the youth representatives behind closed doors, Vucic reiterated Macron's messages from yesterday that we should devote to regional issues, establish the best possible relations, and make maximum benefit out of it.

"Then, we will be much stronger, and it will be less significant what will come out of EU", Vucic concluded, confirming French President's pledge to help Serbia on its EU path.

The presidents Macron and Vucic had talked to the students from Regional Youth Cooperation Office (RYCO) from the whole Balkan region: two young Albanians, a girl from Orahovac, a boy from Tirana, as well as with the young people from Bosnia-Herzegovina, Northern Macedonia, Montenegro and Serbia.

"We have talked to all of them about establishing cooperation in the region. It was my idea in the eve of establishing Berlin Process, to connect people from the region despite their differences, national and religious, so that as many people as possible get involved in the process of exchanging information and cooperation", Vucic concluded.

He said that today a program for social entrepreneurship of young people was launched, thanks to the French Government, and that he promised greater support to Serbia's Youth Coopreation Office program. As he said, that is why every action on approaching young people, which must be offered a better perspective, is important. "We will have bigger salaries. People are leaving the region and we have to change that," the Serbian President said, adding that Serbia will increase salaries and pensions faster and create conditions for a better life for the citizens of Serbia.