Aleksandar Vucic spoke Friday in Belgrade with EU Commissioner Johannes Hahn about Serbia's EU path, the situation in the region and the dialogue with Pristina.

Aleksandar Vucic spoke Friday in Belgrade with EU Commissioner Johannes Hahn about Serbia's EU path, the situation in the region and the dialogue with Pristina. 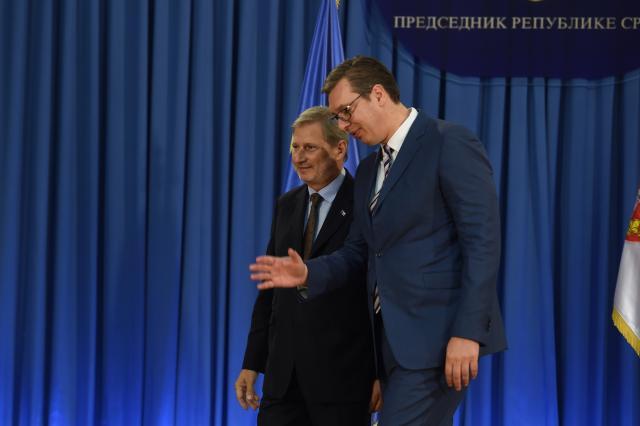 "We believe that the place of the entire region is in the EU and that without the involvement of the Western Balkans, the common economic and political space on the European continent will not be complete," Vucic said. He welcomed the European Union's approach to evaluating the progress of each candidate on the basis of individual merit.

"We believe that the number of open chapters should be more in line with our efforts and the results we have achieved in the negotiating process. Although we are currently focusing on economic chapters, we strive to pay equal attention to the most demanding, reforms-wise, chapters 23 and 24," said he.

Vucic "pointed out that Serbia ranks respect and implementation of the principles of the rule of law among its basic political priorities" and noted that he would do "everything in order for Serbia to fulfill its obligations to as high a percentage as possible until the next European Commission reports on the fulfillment of the commitments undertaken for these chapters, planned for November."

Vucic added that Serbia sees the strengthening of regional cooperation in the Western Balkans as one of the basic leverages for continuing the policy of reconciliation in the region and accelerating the realization of Serbia's strategic foreign policy goal, which is EU membership.

During the meeting, it was noted that significant progress had made in the implementation of action plans for Chapters 23 and 24.

The two officials said they hoped the meeting between Vucic with EU High Representative for Foreign Policy and Security Federica Mogherini and the Pristina side in Brussels will give adequate results in negotiations with Pristina.

They also spoke about Vucic's initiative to hold "the internal dialogue" on Kosovo, when Hahn congratulated him "on this incentive, assessing it as an excellent initiative," the statement said.

Hahn, who is also meeting with Serbia' prime minister and her first deputy and foreign minister today, delivered a lecture to the National Covenant on the EU and member-states ambassadors, to say that Brussels "doesn't want to import the problem of Kosovo to the EU through the back door."

He repeated that "normalization of relations with Pristina directly influences Serbia's further progress in European integrations."

"Enlargement is based exclusively on each candidate's merit, you hold the keys to the EU door, but the EU must see constant, sustainable, irreversible normalization of relations with Pristina before the final accession to the EU," Hahn said.