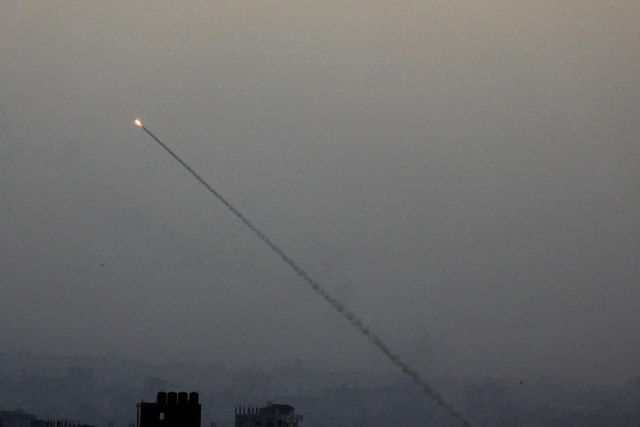 This is the second violation of the otherwise fragile truce reached on May 21, after 11 days of fierce clashes between Israeli and Palestinian forces.

And this attack, as it was announced from the Israeli side, followed after the new "balloon bombs" launched from the Palestinian side causing eight fires in the south of Israel.

The Israeli army said that in response to the arson balloons, they hit military targets and the place of the rocket launch, which belong to Hamas. However, the media in Gaza state that Israeli planes bombed several civilian targets.

The targets, they said, were civilian buildings and apartments, sites and agricultural land.

Israel's defense forces said in a statement posted on Twitter: "In response to arson balloons launched from Gaza into Israel, we struck military compounds and a rocket launch site belonging to Hamas in Gaza.

The IDF has increased its readiness for various scenarios & will continue to strike "Hamas terror targets in Gaza".

In response to arson balloons launched from Gaza into Israel, we struck military compounds and a rocket launch site belonging to Hamas in Gaza.

The IDF has increased its readiness for various scenarios & will continue to strike Hamas terror targets in Gaza. pic.twitter.com/awnCMTcSD9

Hamas, however, did not react to the attacks by launching rockets. However, the situation along the border between Israel and Gaza is still fragile, and a miscalculation by either side could encourage an immediate and serious escalation in an environment that has not returned to peace after last month's fighting.

Photo of the Israeli airstrikes in Gaza tonight. pic.twitter.com/Szh39PwvXO