Ursula von der Leyen says that, despite initial reluctance, EU has done more in the past four weeks than during the first four years of the former crisis 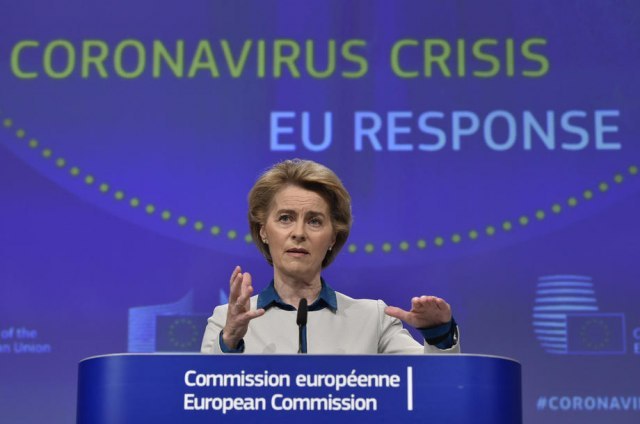 In her address to the EP, she called for the urgent establishment of a "Marshall Plan for Europe", primarily through the EU budget.

In her speech on the EU response to the COVID-19 pandemic, Ursula von der Leyen before the European Parliament expressed her condolences for the "tens of thousands of victims" of coronavirus in Europe.

She also said that in the beginning of the coronavirus pandemic, the EU did not provide timely assistance to the hardest hit Italy at the time of need.

“For many Italians that won't be good enough. The EU wasn't there for them in their hour of need. Many won't forget that.”

Italy has suffered over 21.000 coronavirus-related deaths and witnessed a total of 165.155 cases of infection since the outbreak reached its borders, according to the latest statistics.

"Yes it is true that no one was really ready for this. It is also true that too many were not there on time when Italy needed a helping hand at the very beginning," she said. "For that, it is right that Europe as a whole offers a heartfelt apology", von der Leyen said. Noting many examples of European cooperation from recent weeks, von der Leyen estimated that “Europe has now become the world’s beating heart of solidarity”.

"It's time to put aside the old divisions, disputes and accusations. It is time to get ready for the new world and use all our shared strength and spirit for a common goal”, von der Leyen said.

The President of the European Commission says that Europe must begin to strengthen the sustainability and resilience of society, the economy and lifestyle.

“There is only one instrument that is trusted by all Member States, which is already in use and can act quickly. It is transparent and proven as an investment and cohesion instrument, which is the EU budget. The EU budget will be the basis of our recovery", von der Leyen said.

Ursula von der Leyen reminded MEPs of the Brussels administration's efforts so far to combat the COVID-19 pandemic, stressing that the total value of the aid package is around three thousand billion euros.

"But we need more. Much more. This is going to be a long race and the world will look different tomorrow than it is today," von der Leyen concluded.

"In that spirit, we also proposed to redirect the remaining budget this year towards emergency investments, which will allow almost € 3 thousand billion to go where the money is most needed, namely the procurement of respirators and protective equipment, more extensive testing and the provision of medical assistance to the most vulnerable", von der Leyen emphasized.

She said that European solidarity was yet to be demonstrated, given the "asymmetry" of the economic crisis, which is on the threshold.

"Some regions will emerge faster while others will face hard time. This is why our unity will be more important than ever," von der Leyen concluded.