Vučić about Patriarch Irinej: He surrendered his soul with a single desire VIDEO

Serbian President Aleksandar Vučić said at the funeral of Patriarch Irinej that he died as he lived: in peace with himself, God, the Church and the people. 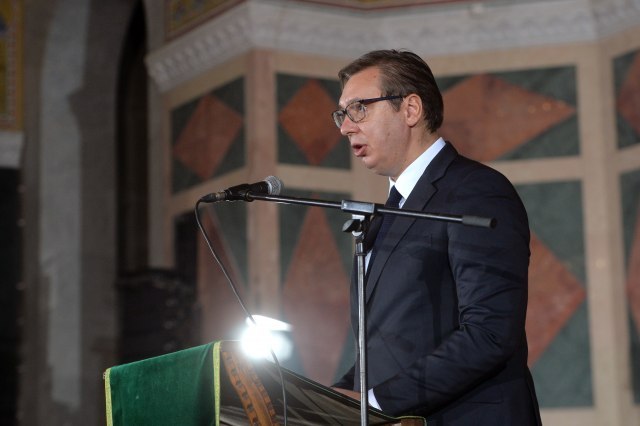 "His God was the God of reason, the one who forgives, understands and loves. God of all of us, the one who does not divide, but unites. Love was the basis of his faith because he knew that faith and hope are impossible without love. His Serbia was the one he was creating. A Serbia of peace, which understands and gathers, which wins through work and wisdom,” Vucic said.

He reminded that the patriarch built the Temple of Saint Sava, and that in many ways he was the temple itself.

"He was conciliar, wise, full of mercy. There was no quarrels and hatred in front of him," he said.

He put Serbs above everything, he said.

"He surrendered his soul with a single desire, that we should never destroy his Temple, his dream," he said.

He compared Patriarch Irinej to a boulder, and said that he will be remembered for the splendor he left behind.

"I am ready to say, if it were not for him, we would have been building this Temple for decades," he noted.

Vučić pointed out that it is a great obligation for us, who, he says, always found it easier to divide, than to gather, to quarrel, than to make peace, to hate each other, instead of loving each other, to take revenge, instead of forgiving.

"And we demolished many temples, before he convinced us to build this one. Will we, taught by his wisdom, preserve it, is no longer just a question of decency, but also a question of our further survival," Vucic said.

He asked if we would know, without him, his gentle hands and calm words, to remain united, without malice, trusting each other, understanding and forgiving.

The late Patriarch Irinej left behind a work worthy of admiration, said Vučić and pointed out that the patriarch united the Serbian people, as well as that Kosovo was his main concern. He approached that issue rationally, seeking ways for us to not recognize the independence of Kosovo and understanding our difficult reality, he believed in the growing force of the Serbian state. He was a great Patriarch, he united the divided Church in America, established a partnership with the state,” he said.

“He loved Russia infinitely and Patriarch Kirill of Moscow, he was grateful to Putin for supporting the construction of the Temple and he believed in the closeness of our two peoples. He was not against anyone from the West, he waited for them to change their attitude towards Serbs”, Vucic added.

Vucic argued that Patriarch Irinej renewed the “culture of memory.”

“We have been ashamed for years and silent about the suffering of our people. Thanks to him, we speak proudly about the heroes from Kosare, we mark the anniversary of the NATO aggression, we are not afraid to tell the truth directly to the whole world,” he added. The Patriarch did not separate Serbia from Bosnia’s Serb-majority Republic of Srpska entity", Vucic said.

"Patriarch Irinej blessed the eternal memory and the annual holding of a joint commemoration of Serbia and Republic of Srpska on the occasion of the terrible crime committed against the Krajina people, against the heroic Serbs from Krajina. That is why every year, with tears and endless sorrow, we mark the suffering of our people in the operation Storm", he added.

He also thanked the patriarch for every word he taught us, for the love he instilled in us, for the wisdom we followed.

"Serbia will remain on your path, aware that every other path is the path of destruction, Serbia will remain faithful to your work, your temple, gathered around your goals. That is our obligation, that is our common desire, divided from today in heaven and on earth", Vucic said.

Vucic said that in one of the last conversations the two had, Irinej urged him to take care of Republika Srpska and Kosovo.

"Don't worry about me, but see that we do everything we can about Srpska and Kosovo", this was the last message of the late Patriarch Irinej to the President of Serbia, which Aleksandar Vučić conveyed today, wishing His Holiness farewell.

At the end of the sermon in the capacity of the President of Serbia, Vučić added a few words, with which he personally said goodbye to the patriarch, whom, as he stated, he loved infinitely.

"A great man has left, our Patriarch Irinej," he said.

"I can't just talk about the relationship between a president and patriarch. I loved Patriarch Irinej infinetly. He loved and cared for my children as much as I did, as he loved everything in Serbia and everything in our people," Vucic said over the deathbed of the deceased patriarch.

He pointed out to those present the great modesty of Patriarch Irinej and the great care on his part for the Serbian people.

"Patriarch Irinej died as he lived, in peace with himself, God, the Church and the people. He had clear goals in his life - God, love and Serbia, the entire Serbian people, wherever they may live," Vucic concluded.