Kon revealed the "secret" of numbers: Very slowly some grow, others fall

Predrag Kon, an epidemiologist and member of the government's Crisis Staff, told TV Prva that we are far from the end of the epidemic. 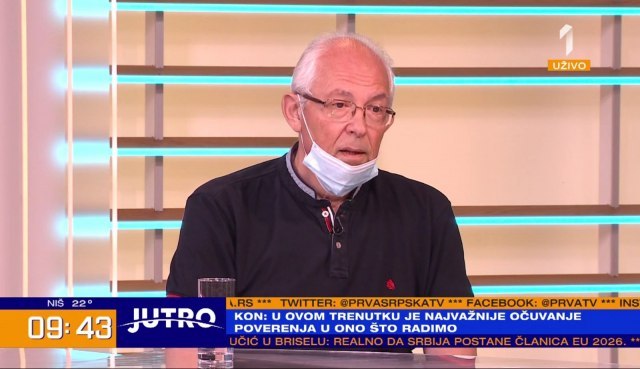 Being hosted on the morning program of TV Prva, Kon explained that all numbers related to the coronavirus are monitored, starting with the number of people who report to the COVID clinic, to the number of cured people.

"Slowly, very slowly, those numbers are starting to decrease," he said, emphasizing another important thing, and that is that, on the other hand, the number of those who have been cured of the COVID-19 virus is growing.

"The most important thing is that more people are being discharged at the moment. We are also following the control tests. The number pertaining to the cured is important. So, the number of patients and tested is slightly decreasing while the number of cured is growing," Dr Kon explained.

However, it is very important, he adds, to emphasize that we are far from the end of the epidemic. This especially refers to the fact that we have a weekend ahead of us, and that the problem is mostly in Belgrade because the measures are least respected in the capital. Borders are being broken, cafes are open after 11 pm, no masks are being worn and when people see this, then they relax even more.

This is also confirmed by the numbers, Dr Kon says, because over 900 people appeared in Belgrade every day, in the period until July 13. The period after that followed, that is, from July 13 to 17, when 750-850 people called daily. After that, in July, that number dropped to around 600. Then came the weekend and the number slowly grew again.

"So, we are far from a safe area," Kon said, emphasizing that we can only succeed if we fight this virus together.

"There is no life if you are constantly closed. It is slowly becoming clear to everyone and it is not any pressure from politics, but from economy, and it will slowly be understood by everyone

"We need to learn to live and work with that", the epidemiologist concluded.