Hunger strikers: Stop wars if you want to stop refugees

A group of refugees in a park near Belgrade's main bus station started a hunger strike on Friday morning and then started traveling on foot toward Hungary. 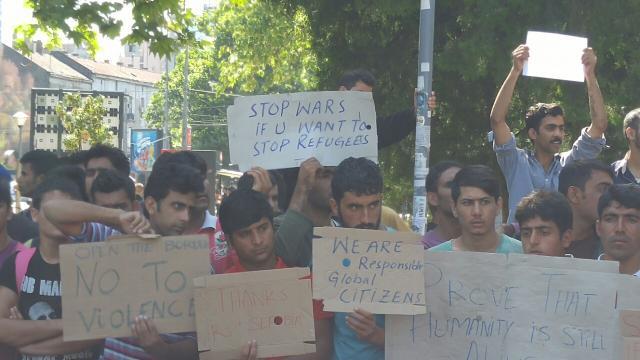 "They started a hunger strike for numerous reasons - the situation on the Hungarian border, fears of deportation and a lack of food for all," Info Park said earlier in the day.

"Just as we were about to start a distribution of the breakfast this morning, a large group of refugees in the park gathered in the central square in the park," they said, adding that the refugees were "refusing to take any food though Caritas and Info Park had 1,200 breakfast portions ready. "

"Unfortunately the Serbian police forces are mounting too. It doesn’t look good at all," Info Park, a B92 Fund and Trag Foundation project, noted.

A group of about 150 Pakistanis, Afghans, and Iraqis, accompanied by the police, on Friday afternoon started walking out of Belgrade and toward Hungary, in the north, in the hope of crossing the border.

Earlier in the day, several hundred people were holding up messages written on pieces of cardboard and also on their bodies, thanking Serbia, accusing neighboring Hungary of mistreating them.

Many had duct tape over their mouths, with the words "open borders" written on it.

They were refusing food on Friday morning despite the efforts of Info Park workers to persuade them they could protest without the health risks associated with hunger striking.

One of the messages of refugees currently in Belgrade, sent to world leaders, is to "stop wars if they don't want refugees."

After launching their protest, the refugees formed groups to clean the garbage from the park, as they wish to show they want to be actively included in solving the problem.

According to B92's unofficial sources, activists from Germany arrived to the Belgrade park on Thursday, and "discussed today's protest with the migrants."

Rumors spread around the park yesterday about an impending police raid that would "clean central Belgrade of refugees" by means of sending those who have papers about their intent to seek asylum to the reception centers, and return others to the countries they entered Serbia from - Macedonia and Bulgaria.

Both the refugees and the humanitarian workers helping them in the park, and defending it from a humanitarian catastrophe, are highly distressed. While the hunger strike is ongoing, additional Serbian police forces have been deployed to the area.

The Info Park humanitarian network has been repeatedly warning about the humanitarian crisis in central Belgrade, the problems with reception centers, on the borders, and an overall failure of the system in dealing with the crisis.