Macedonian President Gjorge Ivanov has given the mandate to form a government to the leader of the SDSM party Zoran Zaev. 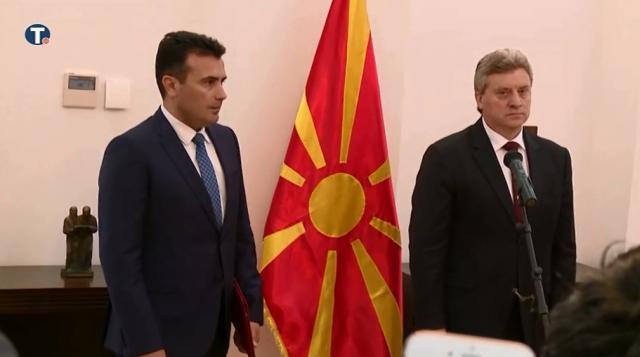 In a brief address earlier in the day in the presidential residence, Ivanov and Zaev emphasized that all obstacles for giving the mandate to the leader of the parliamentary majority had been removed.

Zaev said that he provided Ivanov with guarantees of the parliamentary majority - consisting of the SDSM and Albanian parties DUI, Besa and the Alliance for the Albanians - that the new government will protect and develop "Macedonia's unitarity."

Zaev is confident that he will, as the prime minister, lead Macedonia out of the long-lasting crisis, introduce the rule of law and "successfully restore the country's lost path toward NATO and EU integrations."

Ivanov had the constitutional deadline until May 19 to give Zaev the mandate, after Assembly President Talat Xhaferi informed him on May 9 that a new majority was formed in the Assembly.

Ivanov had been refusing to give Zaev the mandate since the beginning of March, asking the candidate for prime minister several times to provide the parliamentary majority's guarantees that it will preserve a unitary Macedonia.

The president's firm position not to give Zaev the mandate softened after he met with US State Department official Hoyt Brian Yee on May 1 in Skopje.