Today, President of the Republic of Serbia, Aleksandar Vučić, laid a wreath at the Monument to the Heroes of Košare, expressing tremendous gratitude to them. 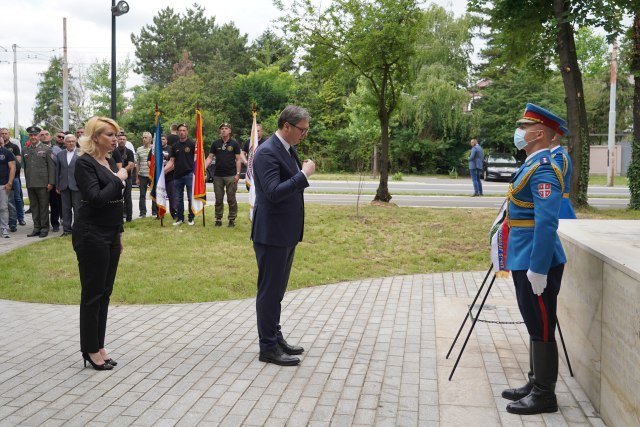 After laying the wreath, Vučić talked to the veterans of the Battle of Košare, who also laid the wreath on the monument, and thanked them for everything they did for the homeland. "If we haven't done anything else, at least today we can talk about those who died and about your role," Vucic shared that fact with the veterans.

He added that he would like to see them again around Vidovdan and to discuss everything in detail, so that they can see what else can be done for them, but, as he said, something that is real, and not what is not possible.

"When I see you, I get additional energy to fight for Serbia even harder, at least with that little risk", said Vučić and added: "Thank you very much for the honor you bestowed to Serbia and let's all of us try not to forget that".

We cannot allow that to happen, the fighters from Košare replied.

"Glory to all your fallen heroes. I wish you all the best, and now I am going to Brussels," said Vucic.

Minister of Labor, Employment, Veterans' Affairs and Social Affairs Darija Kisić Tepavčević also laid a wreath with the President. A monument to the heroes from Košare was erected last year in a park near the KBC "Dr Dragiša Mišović".

On this day 22 years ago, the battle of Košare ended, during which members of the army of FR Yugoslavia defended the state border for 67 days and prevented the ground invasion of the terrorist KLA from Albania into the territory of Serbia. The names of 108 soldiers, non-commissioned officers, officers, reservists and volunteers who died in 1999 at the Kosare watchtower are engraved on the pedestal.

The author of the monument, sculptor Misha Rogan, showed the act of heroism of officers and soldiers who gave their lives defending the homeland.

The battle of Košare began on April 9, 1999, when members of the terrorist KLA, with the help of NATO aviation, tried to carry out a ground invasion through the watchtower and make a breakthrough towards Metohija at the watchtower on the Yugoslav-Albanian border.

The part of the state border around the Kosare watchtower was protected by about 100 members of the 53rd Border Battalion, who opposed a tenfold stronger enemy during the first two days of fighting. A platoon of military police soon arrived to help the border guards, but the attack was violent and KLA forces managed to take the positions of Rasa Kosarez and Maja Glava, points from which every movement towards the border line was controlled, and they also occupied the watchtower building. With the arrival of the members of the 125th Motorized Brigade, a line of defense was formed, which prevented further penetration of the enemy.

In the following days, the army tried to regain Rasa Kosarez and Maja Glava, and members of the 72nd Special and 63rd Parachute Brigades joined them. The front line was stabilized, and the fighting did not abate.

The fighting in Košare lasted until June 14, 1999, when the Yugoslav Army withdrew from Kosovo and Metohija after the Kumanovo Agreement.