Vucic: The state of emergency to be lifted on Djurdjevdan, May 6

Serbian President Aleksandar Vucic has announced that the state of emergency is likely to be lifted on Djurdjevdan, May 6 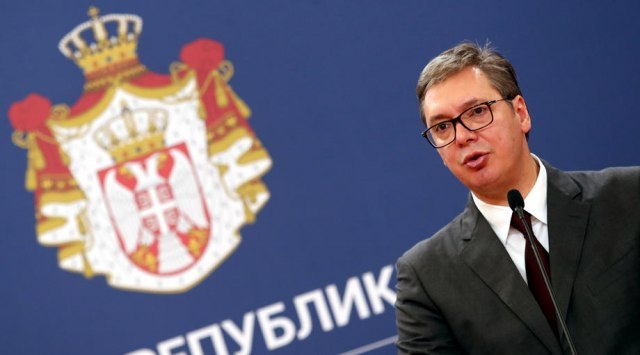 He said the signed proposal by the President and Prime Minister would be submitted to the Assembly on Wednesday and that the state of emergency was expected to be lifted, which would come into force on Thursday, May 7. "That would mean, we wouldn't have a curfew as of Thursday," the President said on TV Pink.

"Of course, it is difficult for people to spend time at home, but it was the only way to preserve our parents, to preserve the younger ones as well, and I think for the most part, we have succeeded," President Vucic said.

The President previously explained that the state found the opinion of the profession essential, when it came to the coronavirus epidemic.

"We have brought these measures in line with what the profession has told us," President Aleksandar Vucic said.

"I am not expert in their field of work and I did not hide that fact. We had no conflict. We tried to find a compromise solution taking into account their opinions," Vucic explained.

He explained that the state had its own responsibilities, among other, to enable it to function during a state of emergency.

"It was our duty to ensure that the state was functioning, to bring our citizens back from abroad, to provide respirators," Vucic said.

Vucic spoke about comparing the situation in Serbia with the results achieved in other countries.

"Serbia was destined to experience something similar to the situation in Italy," he said, explaining that Serbia had successfully fought the epidemic.

"The state has proven to be very serious and very operational." Vucic also praised the doctors responsible for fighting coronavirus.

Epidemiologist Predrag Kon pointed out that he was very pleased that the state was very fast and efficient when it came to implementing all the proposals and measures.

"I think we're near the end of this epidemic season," Vucic said.

"We are committed to protecting life. Imagine if we did what Sweden did, which has over 3.000 dead. When asked why my mother or father had to die, I would not know how to answer," the President said.

The president pointed out that much more testing is now being done to detect a large number of lighter patients. He added that although in many cases people died from other diseases, they were positive and were reported to have died of COVID-19.

"Two dates are possible - June 14 or 21," Vucic said when asked about the election date.

The President said that Serbia is working to improve the health system in the future, and stressed the importance of the IT sector.