We will respond in a responsible and decent way, by preserving Serbian identity, without endangering Montenegro, Vucic said after meeting with Patriarch Irinej 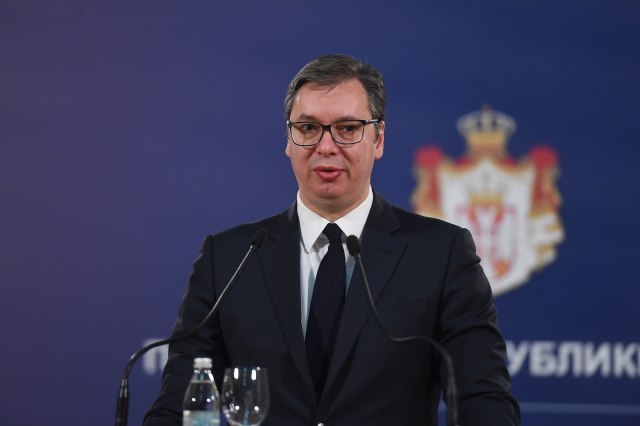 Vucic recalled that 28.73 percent of Serbs and less than 45 percent of Montenegrins officially live in Montenegro, referring to "the intention of part of the Podgorica regime".

"The intention of the part of the Podgorica regime is to reduce the percentage of Serbs in 2021, to declare a reduction in the Serbian corps to a state in which Serbs do not have their constituency, which everyone else in the region has", Vucic said.

President Aleksandar Vucic said that he had spoken twice with the Serbian Patriarch Irinej on all important issues, especially the situation in the region, regarding everything that happened after the adoption of the Law on Religious Freedom in Montenegro, not because neither of us wanted to interfere in the affairs of another state, but because the interests of the Serbian people were directly affected.

"There are many people who will say that those events in Montenegro are not only against the Serbian nation and that there is no need for the Serbian people to stand out from others, that they do not have to write down in a birth certificate that you are of Serbian nationality", Vucic said.

"We have considered it vital for Serbia to safeguard the survival of our people in Montenegro, and that it is very important that we respond with responsibility, seriousness and decency to a fierce campaign of Serb assimilation, as well as dedicate work to preserving the power of the Serbian Corps in Montenegro, without endangering the state legal status of Montenegro", Vucic said.

Vucic announced the decision at an extraordinary press conference after meeting with Patriarch Irinej, saying that he did not want to give an alibi to the Montenegrin regime that it was an attack on the country's independence and constitutional order. "We respect the independence and constitutional order of Montenegro and we have never threatened it in any way, nor are we interested in doing so", Vucic concluded.

He thanked dozens of believers, mayors and representatives of Serbian political parties who supported his arrival.

"I thought it was a normal, ordinary thing for me to do, and then I realized, after reactions from some of the cabinets in Montenegro, that my coming to a private visit, without making any political speeches, without anything, just to come to my church … that this has not been approved by the Montenegrin regime", Vucic said.

He added that he wondered if it was possible that his private visit to a temple could cause this kind of reaction.

Therefore, Serbian President Aleksandar Vucic decided not to go on a private visit to Montenegro on Christmas Eve, saying that Patriarch Irinej agreed with his decision and supported it this morning.

"Visiting a temple triggered a call to NATO?"

Serbian President Aleksandar Vucic said he hadn't expected that his intended visit to a temple in northern Montenegro would cause the local authorities to invite NATO, but that it was good because, as he said, it showed what kind of anger the Montenegrin authorities show towards Serbia.

Vucic urged Serbian citizens to express their political judgment in a dignified manner, with respect for other states and for the state of Montenegro, as well as respect for Serbs in Montenegro, and other citizens of that country, who, as he said, are also Serbian friends and brothers.

"I will preserve the unity of Serbia both in Montenegro and wherever Serbs live, and I will not allow Serbian people to serve as a punching bag," Vucic emphasized, adding that now Montenegrin authorities have the opportunity to "level" to the ground Christmas liturgy and insurgency.

Message to Serbs in Montenegro: We are one nation

My crucial message to our people in Montenegro is that we belong to one nation, and we will not allow anyone to destroy our past or future, Serbian President Aleksandar Vucic said.

"We will not allow them to destroy us peacefully or in any other way. We will fight for the truth, without weapons, we will oppose the lies they serve, we are in only for the truth. We want to talk to them, because they are our brothers, but they will also have to show respect for their brothers", Vucic concluded.