Vucic and Zeman on the possibility of withdrawing Kosovo recognition 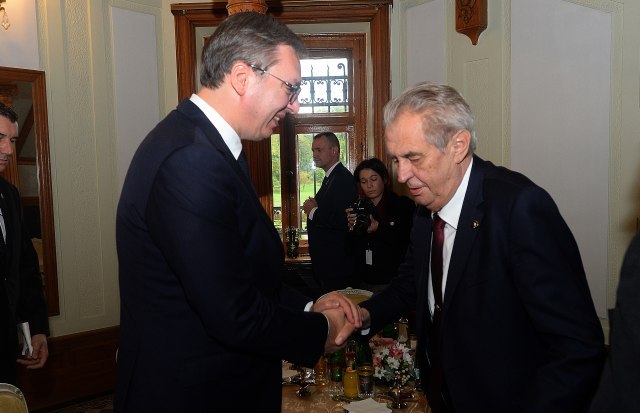 Vucic stressed at a press conference that he cannot interfere in the internal affairs of any country, or even in the decision on a possible change of attitude regarding the status of the so-called Kosovo.

Czech President Milos Zeman added that when it comes to his initiative to have the official Prague annul the decision of recognizing Kosovo's independence, he will try to convince his colleagues.

"I said that at the first meeting with the representatives of the Czech authorities dealing with constitutional issues, I would put forward a proposal to withdraw recognition. We are democratic country, I can be outspoken, but I will try to persuade my colleagues about invalidating the decision on Kosovo's independence recognition", he said.

"I wish others had a similar opinion", he added.

Vucic said he was grateful to Zeman for his support on this issue: "I am grateful to Czech President Milos Zeman for his views on Kosovo. I spoke today about our policy towards Kosovo and the problems we are facing. I reiterated Serbia's position that a compromise solution is the only possible path for the future of the entire Western Balkans and in the EU, but also for better relations between people living in the Western Balkans", Vucic concluded.