"Some countries gave birth to political monster in Pristina"

Ivica Dacic said on Monday he would not be surprised if Pristina had indeed banned members of the Serbian government from entering Kosovo and Metohija. 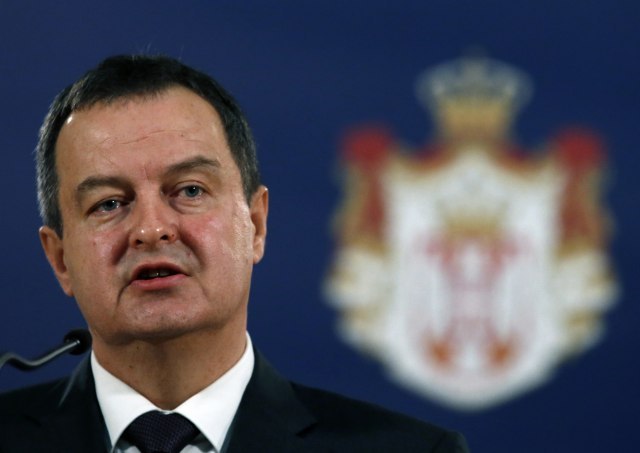 The first deputy PM and foreign minister stressed that this would run contrary to all agreements reached in Brussels (during EU-mediated Belgrade-Pristina negotiations).

Dacic told reporters he would not be surprised by such a decision, given that imposing a 100 percent tax on goods (from central Serbia) was proof there was no rational and reasonable policy in Pristina now - " we have moved into the sphere of political insanity."

"This issue is not for us but for the international community, the EU, and the question is what they will do about it. Some countries have given birth to a political monster in Pristina and it's time they've set boundaries for it," Dacic said, adding that he did not believe in the stories coming from "the international community" that Pristina "would not listen to them."

The head of diplomacy said that Kosovo Minister Shala had posted a photo with (Albanian PM) Edi Rama, and the inscription "100 percent" on Facebook - and that "Rama may have been abused, but it is in any case necessary for him to distance himself."

Dacic stressed that Albania and Kosovo are talking about removing borders and abolishing customs and the border police, and added that there was no purpose in Serbia participating in regional cooperation meetings - "if Europe really does not see what this is about, and the level of hypocrisy of Albania and Pristina."

Asked if he would suggest that Serbia should not be taking part in regional meetings, Dacic said that a conference on revitalization of regional cooperation should be held first. "This is not a hallmark of the 21st century, something like this only happens in Kosovo, and if someone thinks that we will stop or get scared, or stop fighting for our state interests, and that we will recognize Kosovo, they are mistaken. If somebody thinks we're scared of Haradinaj - it's time to wake him up from the hypnosis he's in. I'm afraid he is not alone, those are puppets managed by someone from the side," Dacic said.

Asked if Moscow could be to Belgrade what Washington is to Pristina, Dacic said that Serbia is "not seeking support from anyone, but respect of international law."

He pointed out that officials in Serbia "will not listen to the international community that they were to blame for Pristina's mindless moves and that they caused them by (Pristina) not being admitted to Interpol."

"This is not about somebody wanting to do something to Serbia, they want to disturb regional peace and stability. Serbia will not allow itself to be drawn into that mud, but will defend its national interests," said Dacic.

He said Russia and China can help Serbia in the sense that these two countries guarantee the UN will not revise Resolution 1244, and will not recognize Pristina's unilateral acts. "We would like this to be a shared approach by all permanent members of the UN Security Council," Dacic concluded.