Foreign Minister Ivica Dacic says that "not even the support of the Austrian chancellor" had helped get the Pristina authorities in Interpol. 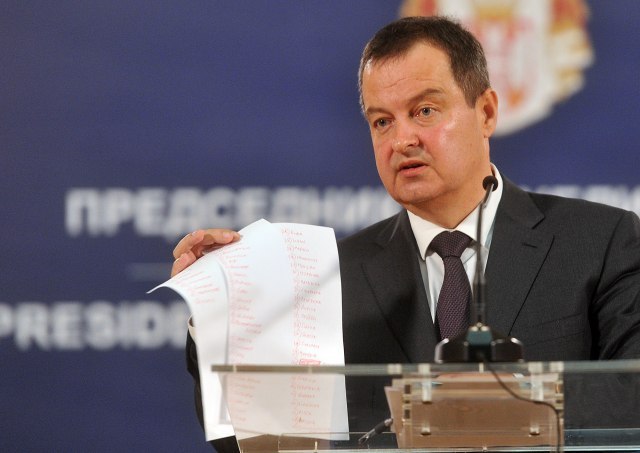 "As they chose who to get to Interpol through - so they managed to do it," Dacic said in a news conference held after the vote at the international police organization's General Assembly in Dubai, that once more saw Kosovo fail to garner the necessary support and become a member.

Dacic spoke to the press after President Aleksadar Vucic, who commented on the outcome of the Dubai vote in a considerably more moderate tone.

According to him, "Kosovo tried everything by force, starting from UNESCO all the way to the Interpol membership, contrary to all international law, thinking it was enough for great powers to write down their demands, send them, and everyone would support them."

"It's no time to be euphoric. I've been saying this a long time ago. I told them (Pristina) not to apply and embarrass themselves, that they would experience a debacle. I wanted to protect them from the embarrassment. now, let them justify themselves to their people," Dacic stressed.

According to him, Interpol has 192 members, and in the first round 154 delegations voted, 76 in favor of admitting Kosovo, 56 against, while 22 abstained.

"Now, they came up with two rounds, as if they were to vote until they have the majority. Those who abstain are not counted, two thirds were needed of those who voted for (Pristina) to pass. In other words, they were 33 votes short," said Dacic.

"Let them now explain if we were lying when we said (some countries) revoked recognition of Kosovo," he added.

He then said that Interior Minister Nebojsa Stefanovic protested because procedure was violated by introducing a break between the two rounds of voting today.

"Why was there a second round and why the break? There's no break anywhere (in the rules). What was it for unless they meant to get something done. But listen, they were 36 votes short. Not even (Sebastian) Kurz helped, and both Kurz and (Hashim) Thaci celebrated.

"As they chose who to get to Interpol through - so they managed to do it," the Serbian minister said.

"In other words, a convincing victory (for Serbia). I told Kurz, you're clever, well what kind of fool sides with losers. And (Heinz-Christian) Strache has to explain to the Serbs why he lied to the Serb nation. Kurz is no better. I think he is worse," Dacic stressed.

Quoting a popular wartime Serbian song, "Who's that saying, who's that lying Serbia is small," Dacic added:

"I know who we were up against, against the most powerful countries, against lobbying and money changing hands, and I want to thank from the bottom of my heart those countries that voted against. Felicitations to the (Serbia) ministries of foreign an interior affairs, especially Nebojsa Stefanovic who was there (in Dubai) and who was under great pressure. And finally, to President Aleksandar Vucic," Dacic concluded.