"No more dialogue until Pristina withdraws its decisions"

Serbian President Aleksandar Vucic has said that the dialogue in Brussels will continue when Pristina withdraws its unlawful decisions. 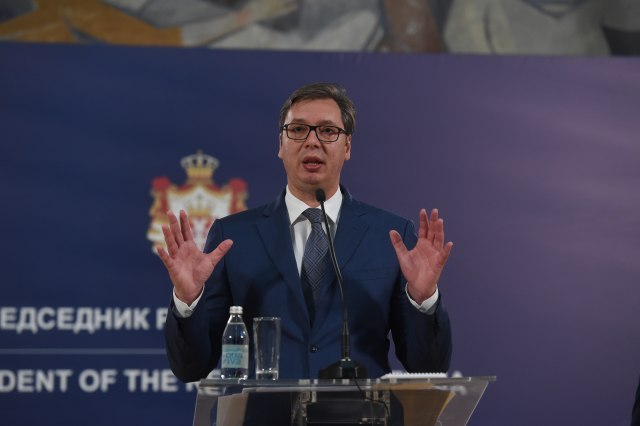 Vucic - who was in Brussels on Thursday for his EU-mediated meeting with Kosovo President Hashim Thaci - that "no Serbian representative will appear in Brussels (again) until that happens."

Vucic said that "Pristina's decision on an additional 10 percent tax on goods coming from Serbia will remain in force" - while they are not very upset about it "in Europe" - and also warned that "Europeans intend to push Serbia out of the energy network for northern Kosovo."

"To the citizens of Serbia I want to say that difficult days are ahead of our country, in the political sense. In the past days, we received the decisions of the Pristina authorities that, unlawfully in regard to the (regional trade) CEFTA agreement, increased the tax on goods from Serbia. No one from Europe was particularly excited, other than a statement from (Federica) Mogherini," he said.

Vucic also warned of Pristina's intention to form an army and send a garrison towards the north "mostly-Serb populated part of Kosovo) - "which is contrary to the Brussels agreement and the agreement we have with NATO."

"What is happening tomorrow (Friday) is the third thing - Europeans are trying to throw us out of the energy network for northern Kosovo, unlawfully. In the draft, the proposal for the energy dispute, it was clear that the ZSO (Community of Serb Municipalities in Kosovo) must be formed, and those two mixed companies in the north would have been the transfer to the Albanian operator. Since the ZSO has not been formed, for which Pristina is to blame - they are now trying to get rid of us, to grab away from us the right to electricity, to make us lose power lines to Macedonia, Albania and Montenegro," Vucic said.

They want to throw us out, unlawfully, without respecting our arguments, Vucic warned, and added that "the decision will be on Monday."

According to him, against such a decision are Germany, France, Italy, Switzerland, Belgium, Luxembourg, Croatia, the Netherlands, while Serbia's stance is represented by Spain, Slovakia and Bosnia-Herzegovina.

"We fight as much as we can, but the chances are small," he said.