Serbia to strengthen cooperation with Baden-Wurttemberg

Prime Minister Ana Brnabic attended on Tuesday the Closing Plenary Session of the fifth session of the Joint Commission Serbia-Baden-Wurttemberg. 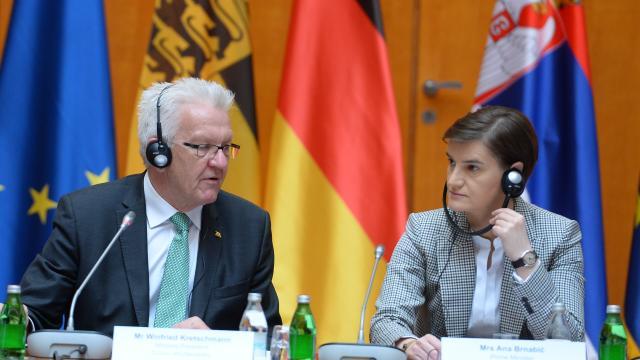 On that occasion said that this German state is one of our most important economic partners, the Serbian government reported.

Brnabic pointed out that Serbia's goal is to achieve more dynamic economic growth, more jobs and better paid jobs, and that Serbia's relations with Baden-Wurttemberg are of great importance for the overall relationship with Germany.

The prime minister underlined that she will seek to further strengthen economic cooperation with this German state and to attract new investments.

According to Brnabic, more than 100 companies and small and medium-sized enterprises from Baden-Wurttemberg are operating in Serbia, employing more than 8,000 workers.

She also added that the overall trade exchange between Serbia and Baden-Wurttemberg exceeded €600 million last year, which is 12% more than in 2016, with the expectation that this will increase in 2018.

The Prime Minister stated that the topic of working groups within the Joint Commission is infrastructure, energy, transport, environmental protection, culture, education and digitization, which, as she pointed out, is one of the priorities of the Serbian government.

She highlighted the importance of cooperation in the field of culture and invited the delegation of Baden-Wurttemberg, in which over 70,000 Serbian citizens of different ethnicities and education live, to come to the opening of the National Museum in Belgrade at the end of June.

Brnabic also pointed to cooperation in the field of environmental protection, saying that this area will be one of the biggest challenges on Serbia's road to the EU. At the same time, she announced that it was agreed to promote cooperation within the framework of the Danube Strategy.

Minister-President of Baden-Württemberg Winfried Kretschmann said that Serbia and Baden-Wurttemberg are good trading partners, and that in the upcoming period they will work to improve bilateral cooperation.

Kretschmann said that the EU's doors to Serbia are open, as Serbia is on the right track and wants to fulfill its goal with great determination.

According to him, this German state is Serbia’s partner on path to the EU.