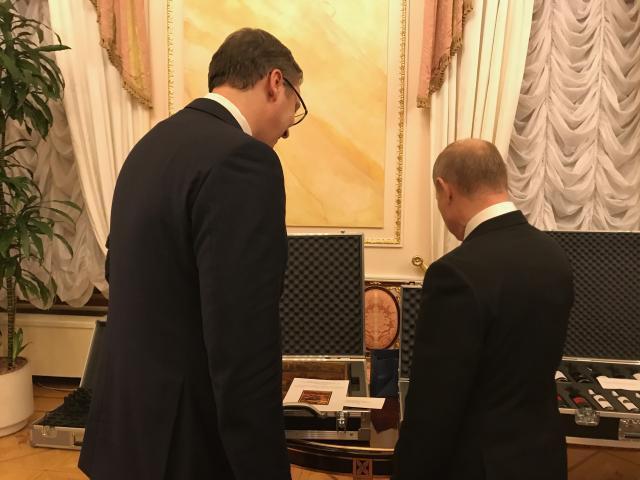 The Serbian presidency announced this is a statement late on Wednesday, adding that Vucic informed Putin about the latest events in Kosovo and Metohija, particularly about the brutal attack on Director of the Office for Kosovo and Metohija Marko Djuric, who was beaten by Albanian forces through no fault of his own."

"President Vucic asked for the opinion and advice of the president of the Russian Federation, on how to counter Pristina's violence and aggression, since it is completely clear that Albanians have broad support of numerous Western countries for their unilaterally declared independence and the acts that result from it," the statement said.

It is added that Putin told Vucic his country was carefully monitoring the events in Kosovo and Metohija, and strongly condemning Pristina's actions and the violence against the Serb people.

"The violent behavior against high ranking Serbian officials is unacceptable and deserving of every condemnation," Putin is quoted as saying.

The statement stresses that Putin emphasized Russia accepts only the implementation of UN Security Council Resolution 1244, and that only that which is taking place within the framework of Resolution 1244 can have international legal effect.

"President Putin stressed that Serbia is the key partner of Russia in the Balkans, but also in Europe, and that the Russian Federation will support the Republic of Serbia and its struggle to preserve its independence and territorial integrity," the statement said, and continued:

"President Putin stressed that he is aware of the pressure exerted on President Vucic and Serbia, and that, accordingly, he will be taking further measures and reacting in time, and stressed that the two presidents will remain in contact. At the end of the conversation, both presidents expressed hope and expectation that common sense would prevail, as well as normal, civilized politics, and that all political conflicts would be resolved peacefully."

The statement added that Vucic used the opportunity to congratulate Putin on the convincing victory in the Russian presidential election, and expressed his belief that this victory would contribute to the advancement of Russian-Serbian ties, but also of more equitable relations in the world.

"President Vucic told President Putin that Serbia will not take part in any measures against the Russian Federation and that it will not expel Russian diplomats, despite the fact that almost all countries in the region have already done so. Presidents Vucic and Putin agreed that they will be in constant contact due to the seriousness of the overall political situation," the statement concluded.

After his phone conversation with Putin, Vucic told the media that he felt he received "the highest degree of support" from the Russian president.