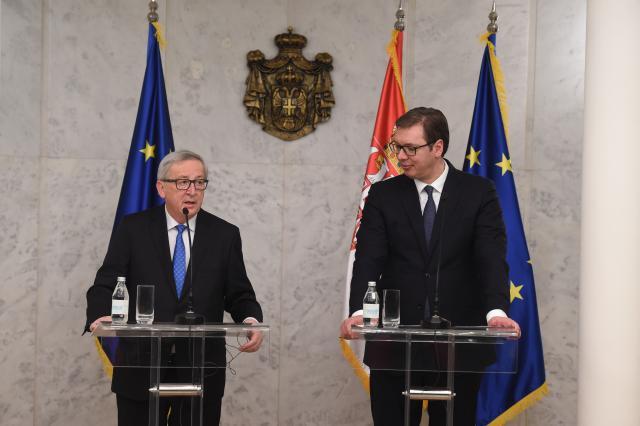 "We want to offer stability to the countries of the Balkans, not to import instability," Juncker told a press conference with Serbian President Aleksandar Vucic in Belgrade late on Monday.

According to him, Brussels wants to a normalization of relations between Belgrade and Pristina.

"However, it is not for us to say what the character of this agreement will be, it is up to Belgrade and Pristina to determine that," Juncker said.

He added that he "likes to visit Belgrade," and that this was his second visit - while there will soon be a third.

The EC president, who traveled here with EU Commissioner Johannes Hahn as part of his tour of the Western Balkans, thanked Vucic, who he said "received them like princes."

"In Brussels, we often talk about Serbia, and I also wanted to talk to the Serbs. This is not an inspection, no information gathering, it's an open discussion," he said.

"The Western Balkans and Serbia must be part of the EU, without them it is not complete. The EU is not the exclusive property of current members, other countries want to enter. Serbia has made the most progress so far, but that's normal, we have been negotiating for some time now. Others will only start negotiations... The date of accession does not depend on us, but only on Serbia," said Juncker.

"I know there are many who speak about 2025 (as accession date) and want to be perfectly clear - it's not a promise, this is a perspective, an opportunity, encouragement. A country that wants to become a member after a great deal of effort should be encouraged. All of your efforts have not been in vain, Serbia has launched a number of reforms, some were painful and deserve our respect and admiration," he added.

In addition, Juncker pointed out that he "did not come to Belgrade to give lessons."

"Serbia does not need lessons, it's a great nation. After today's talks I am calm, Serbia is heading for the EU," Juncker said.

Asked about Serbian Foreign Minister Ivica Dacic saying that "some in Brussels expect Serbia to commit harakiri" when it comes to Kosovo, Juncker replied: "We will not ask your chief of diplomacy to commit harakiri, I really would not want him to do something like that."

During the news conference, Aleksandar Vucic told reporters said that Serbia "could become a part of the EU by 2025 if it finishes a lot of hard work by then."

Vucic said that a legally binding agreement with Pristina was the most difficult issue for Belgrade.

"It's the hardest one for us. It's the question for all our citizens, and one for the future," Vucic said, adding that it was important that in a compromise with the Albanians both Belgrade and Pristina should lose something, instead of one party winning everything, and the other losing everything.

"If it is not possible, we shall be living in the past," Vucic said, adding he would like to avoid such a situation.

Vucic said that most EU members expect an agreement to allow Pristina into the United Nations and other international organizations, but that this was not what five EU states and Serbia wanted.