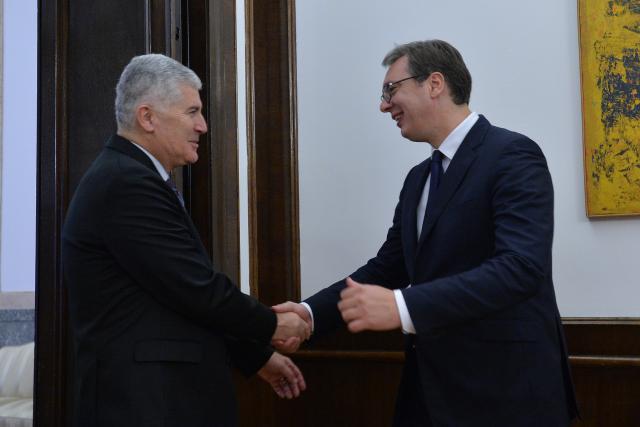 According to the Serbian president, this meeting "may be the most important one for our countries, but also for the entire region of the Western Balkans."

This meeting, he continued, would led to more important and more concrete solutions for numerous political, economic and social issues.

Vucic described Bosnia-Herzegovina as "one of the most important political partners of Serbia - since relations between us are key for preserving peace and stability in the Western Balkans and for a different and better future for citizens of both countries."

Following the meeting with Covic, who represents Croats in the tripartite body that he currently chairs, the country is Serbia's "most important foreign trade partner" with trade expected to reach 1.6 billion euros by the end of the year.

Vucic said they also discussed "determining the border between the two countries" and noted that "373 kilometers have been agreed on."

According to him, what remains is the area around the hydroelectric power plants (HPPs) Zvornik and Bajina Basta - i.e., 17 hectares near the HPP Zvornik and five near HPP Bajina Basta remain disputed.

Vucic said he told Covic during the meeting that the decision of the Court of Bosnia-Herzegovina to release Naser Oric - accused of war crimes against Serbs - was "not easy" for Serbia - "since there are living people who were present as the crimes were committed."

Vucic also announced that Serbia on Monday made a 500,000 euro payment toward the construction of a cathedral Orthodox church in the town of Mostar, in Herzegovina.

"It is important for the survival of the Serb people, but also for the reconstruction of holy Serb places," Vucic said, and thanked Covic for suggesting that the church be restored.