Defense Minister Zoran Djordjevic on Wednesday traveled to Belarus for the closing of the Belarus-Russian-Serbian military exercise "Slavic Brotherhood 2017." 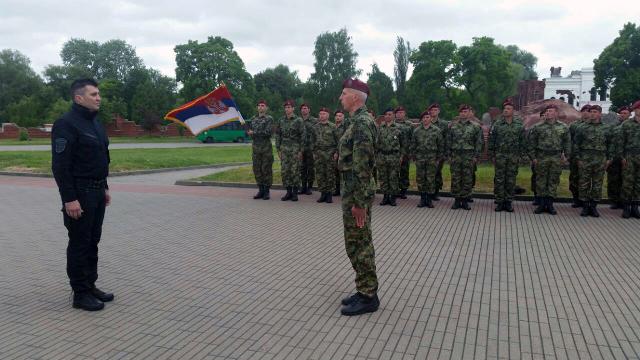 Djordjevic also attended a reception organized by Belarus Defense Minister Andrei Ravkov for his guests of honor, the Serbian government has announced.

Djordjevic visited the Serbian Army (VS) soldiers who took part in the drills, and then watched the troops from the three countries train "fighting terrorists, solving a hostage situation, and preventing penetration of terrorists - including nighttime shooting and nighttime parachute jumps carried out by Belarus, Russian, and Serbian soldiers."

Djordjevic "congratulated the participants on the successful completion of the tasks, and added that he is proud of the excellent training of the Serbian Army, which alongside their Belarus and Russian colleagues showed that they are ready to execute complex combat missions."

"Slavic Brotherhood 2017" started on June 6 near the town of Brest in Belarus, with with participation of over 300 servicemen from Russia’s Pskov Air Assault Division of the Airborne Forces, over 400 soldiers from Belarus’ Air Assault Brigade of the Special Operations Forces and 50 soldiers from Serbia’s Special Brigade.

During their meeting on Wednesday, Djordjevic and Ravkov assessed that the exercise "lived up to expectations and that it is a great modality of cooperation that enables the exchange of experiences among members of elite military units."

They said that cooperation in the field of defense has improved substantially, and reached "the high level of general and political relations between the two friendly countries."

According to the government's Serbian language website, Djordjevic also announced that Serbia intends to, in the near future, transition "to the level of an active participant" from the observer status that the country currently holds in the CSTO.