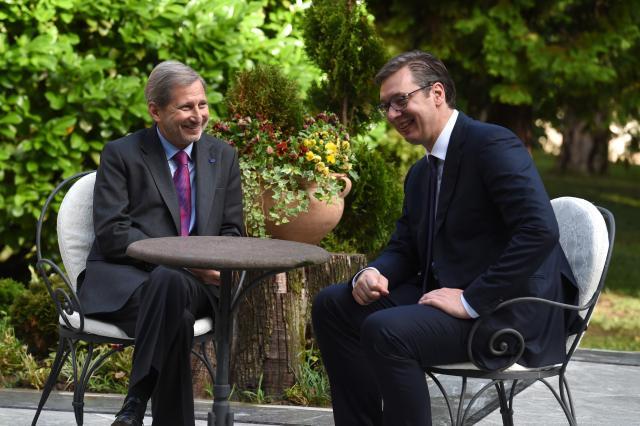 Vucic thanked Hahn for his dedication to the process of enlargement, and said several important tasks were ahead of Serbia.

"I told our friend Hahn that several important tasks are ahead of us - continuation of the European road, opening of the internal issue on constitutional changes and Kosovo and Metohija, that must not be permeated by the mythical approach, or the approach that we will easily give up on everything that belongs to us. When we set the goals for the future we will find the way easily," said Vucic.

He also thanked the EU commission for maintaining regional stability.

"Everything depends on regional peace and stability. I did not want to gain political points by criticizing what everyone is saying. There have also been irresponsible statements that are often also threatening, but we must to stick to the soothing tone, not because we are weak but because that is how decent people behave. We will invest a lot of effort, we are ready to continue the dialogue with Pristina, and not interfere in the internal politics of any country in the region, but we will strive to maintain peace. A lot of difficult topics are ahead of us with Hahn - the rule of law, the fight against corruption, and we hope to achieve good results," said Vucic.

Hahn congratulated Vucic on assuming the Serbian presidency, addressing him as "dear president," and said a busy agenda was ahead of them.

Responding to questions from reporters about his thoughts on inflammatory rhetoric coming from Pristina ahead of the elections in Kosovo, and the blackmailing around the continuation of the Belgrade-Pristina dialogue, Hahn said he did not wish to go into the statements made by Pristina politicians, and that they may be interpreted as part of the election campaign.

However, Vucic did not agree with Hahn. He said does not consider the threats coming from Pristina to be pre-election rhetoric "at all."

"Statements that imply a threat to the survival of the Serb people and the fact that this goes unpunished are worrying. If we talked like Pristina - that we won't continue the dialogue, if we threatened with violence, I am sure that by now hundreds of press releases and statements of warnings to Serbia would have been issued," Vucic said.

Referring to the fact 22 out of EU's 27 member-states have recognized Kosovo, he continued:

"We must understand that our view is different than the view of 22 of the 27 EU member states. I'm not adding fuel to the fire, I do not think this is about the campaign and getting votes, and that's what worries me. But, I will not say a single ugly word and insult anyone, peace and stability is our policy."

Vucic asked EU members and other world officials to evaluate the actions of leaders in the Balkans in an objective, independent, and rational manner.

"I also plead with politicians in Pristina to think differently, and try to overcome what they did 20 years ago, and start thinking what will happen in 20 years," he said.

Asked by reporters whether the German plan for the Western Balkans, dubbed "the mini Marshall Plan," was a substitute for Serbia's membership in the EU, Hahn said this was "by no means" the case.

"Quite the contrary. It shows the commitment of the EU, especially Germany, to further invest in the region," the EU official said.

Vucic concluded the news conference by saying, "Bye now - I'm off to Kazakhstan."