Outgoing EU Special Representative in Kosovo Samuel Zbogar says the Community of Serb Municipalities (ZSO) "cannot be imposed on either side." 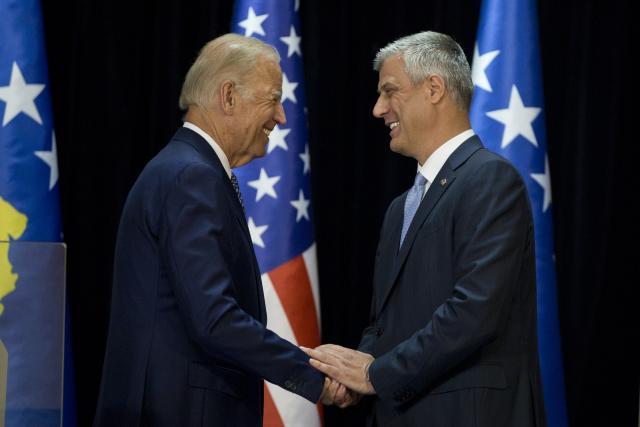 Biden and Thaci in Pristina earlier in the week (Tanjug)

According to a Beta agency report on Friday, he stressed that both the Serbian and the Albanian sides "fear" the formation of the ZSO.

"The only way is to sit down at the table and try to find a functional solution that will keep Kosovo functional and at the same time give Serbs certain assurances that they can feel good and be integrated into society," Zbogar has told Radio Free Europe.

As he said, it is much easier to talk about it than to negotiate. The Slovenian diplomat also noted that Kosovo's constitutional court has provided directions on how to arrive at the ZSO, and that he thought it was time to move forward.

According to Zbogar, Belgrade and Pristina are entering a new phase of dialogue in which the two sides should declare themselves on what the talks should look like in the future, what questions should be opened and what the dialogue is leading to.

"I think there is the need to restructure the dialogue and for preparations for the dialogue to be done differently. What we see in Kosovo is skepticism toward this process because of the lack of transparency in the earlier stages of the dialogue," Zbogar said, adding that work is under way with the EU to get as many people as possible involved in the dialogue.

Zbogar said that "the inability of the political elite in Kosovo to reach agreement on strategic, national interests" hinders the process of European integration.

"It is regrettable and it does not help Kosovo. At the same time, it interferes with a more rapid progress of Kosovo in the process of European integration," said Zbogar.

"We have made it clear that chapter 35 for Serbia is intended precisely to normalize relations with Kosovo. Also the Stabilization and Association Agreement with Kosovo has a provision that talks about the need for Kosovo to implement agreements and continue the dialogue with Serbia," said Zbogar.

The EU representative also said that the Kosovo politicians are responsible for the ratification of the agreement on the demarcation with Montenegro, and expressed hope that members of the Kosovo Assembly would be "persuaded to adopt it" by September 1.

"The demarcation and the Association of municipalities with Serb majority are part of the process of European integration of Kosovo, not the opposite. What I think hinders or slows down the process toward the EU is the socio-economic situation, unemployment and the economy, but also a lack of rule of law," said Zbogar.

When asked when the Special Court for war crimes committed by the KLA ("Kosovo Liberation Army") can be expected, Zbogar said that "Kosovo has done everything" and that he "thinks it will happen by the end of the year."

"After that, special chambers will be formed, and what will remain to be done is for the prosecutor to raise indictments and start working. All preparations are being made now on the basis of the interim agreement signed in the Netherlands, which immediately entered into force. We are now recruiting the president, judges and other staff. Preparations are underway and this means that once we have a legal basis, the court can begin to work," concluded Zbogar.

Earlier this week, U.S. Vice President Joseph Biden and Kosovo Prime Minister Hashim Thaci also spoke about the establishment of the ZSO, with Biden saying it was necessary, while Thaci warned it would difficult, but must happen if Pristina wanted to avoid being isolated from the U.S. and EU.