EU's reaction to Vucic's letter "has no essence" - minister

Justice Minister Nikola Selakovic says the EU's reaction to a letter PM-designate Aleksandar Vucic sent earlier this week has "no essence at all." 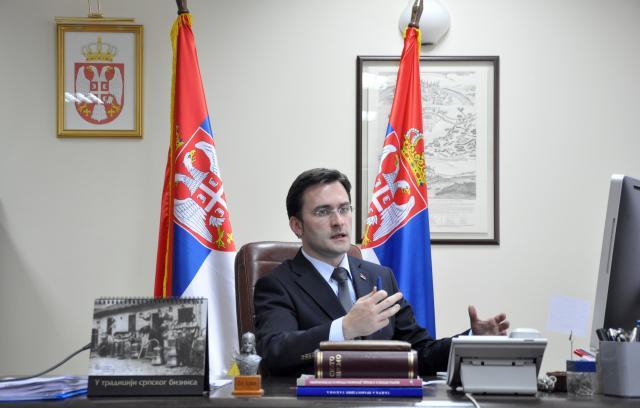 Namely, European Commission spokesperson Maja Kocijancic said that the issues raised in the letter sent to EC President Jean-Claude Juncker concern fundamental and undeniable principles of the EU, "to which members and candidates are expected to be committed. Selakovic said it was "strictly a formal statement ".

Selakovic said this was "strictly a formal statement ".

The minister told Serbia's state broadcaster RTS that he "wanted to believe there will be a different reaction from the EU, because Serbia had not provoked Croatia to this kind of diplomatic conflict with any of its acts."

"In Croatia, there is no apology, nothing that would mean official Croatia distancing itself from what is happening," said Selakovic.

European Commission (EC) spokesperson Maja Kocijancic confirmed on Tuesday the EC had received and was considering a letter from Serbian Prime Minister Aleksandar Vucic warning EU institutions of Croatia's anti-Serb policy, and noted that the EC expected all Western Balkan countries to respect their obligations and European principles.

"The accession process of the Western Balkan countries, including a country that is now an EU member state, is based on reconciliation, good-neighborly relations and regional cooperation. These principles continue to be implemented and they are seen as a commitment, as well as an obligation of the entire region," Kocijancic told Tanjug in Brussels' first reaction to Vucic's letter.

The EC's official response to the letter can be expected soon, she noted.

Prime Minister Aleksandar Vucic told a news conference in Belgrade late on Monday that he had sent a letter to EU officials in which he expressed concern over recent developments in the region, and pointed to a naked anti-Serbian policy, which is conducted primarily in Croatia, the Serbian government said on its website.

He pointed out that "our country did not provoke anyone, but only made it clear that it does not agree with the moves that are related to Branimir Glavas, Miro Baresic and Alojzije Stepinac, and sent letters of protest on the occasion."

These are events that seriously threaten regional stability, the prime minister noted and underlined that he wants European officials "to say whether our country has done something wrong and what exactly, in the context of the recent events in the region."

Vucic explained that in his letter he stated "factual events that negatively affect the preservation of peace and political stability in the region," and that it "outlines what our country has been facing in the previous period and what it had to put up with."

The prime minister pointed out that Croatia is raising monuments to terrorists validly convicted in the EU, it is rehabilitating war criminals and abolishing verdicts for crimes committed during the Second World War and in the recent wars.

At the same time, he said, people who had been validly sentenced in Serbia and then extradited to Croatia to serve their sentences there, have been released on the grounds of an alleged illness, Vucic stated.

"Our obligation is not to agree with the policy of declaring criminals for saints, declaring terrorists for heroes to whom monuments should be erected," he underlined.