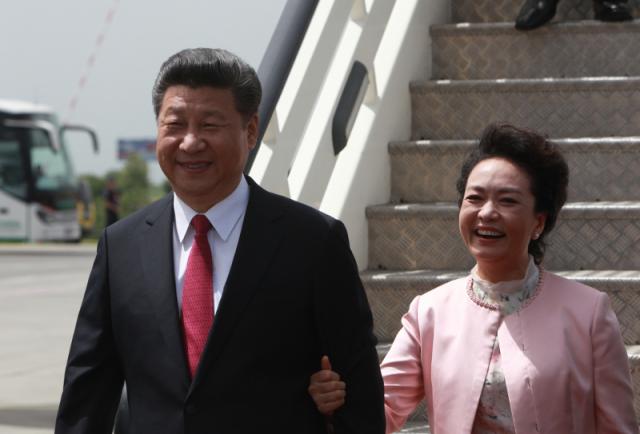 The Chinese leader was also welcomed at the airport by children wearing folk attire, and with Chinese and Serbian flags.

A half-hour cultural-artistic performance was also organized, according to reports.

This is the first time 30 years that a Chinese president is visiting Serbia.

Xi, who is at the helm of one of the world's most powerful countries, will spend three days here.

Chinese President Xi Jinping expressed confidence on Friday that his visit to Serbia will be a success and open a new, historic page in Sino-Serbian relations.

"I expect to exchange views with Serbia's leaders on bilateral relations and other matters of mutual interest, and plan the future development of our relations with them," Xi said in a speech at Belgrade's Nikola Tesla airport.

Utilizing a positive trend, China is prepared to take bilateral relations and practical cooperation to an even higher level, creating a new situation of mutually beneficial cooperation, a joint victory and joint development, he noted.

The Chinese leader said that the traditional friendship between the two states and their peoples stood the test of historical temptations and turbulent changes on the international and domestic scenes, and is now marked by "a new shine of an old tradition."

Sino-Serbian bilateral relations have been in the fast lane of development in recent years, especially since 2009, when the two countries established a strategic partnership, he said.

Mutual trust is strengthening, and cooperation in the energy sector, construction of transport infrastructure and agriculture are reaching new brilliant heights, along with a dynamic cultural exchange and an increasingly intensive exchange of people, Xi said.

The program of the visit

President of the People’s Republic of China Xi Jinping will be on an official three-day visit to the Republic of Serbia June 17-19, at the invitation of President Tomislav Nikolic, the Serbian president's press service announced earlier in the week.

During the first day of the visit, Nikolic and Xi will lay the cornerstone for the construction of the Chinese Cultural Center and unveil the monument to Confucius, as well as the plate of the newly-named Confucius Street and the Serbia-China Friendship Square. On the occasion, the two presidents will lay the wreaths at the memorial in honor of the officials of the embassy of China, who fell victims to the 1999 NATO bombing.

Nikolic will decorate Xi with the Order of the Republic of Serbia on a Grand Collar.

After the presentation ceremony, the president will meet with Serbian Prime Minister Aleksandar Vucic and the members of the delegations, as well as the Speaker of the Serbian National Assembly Maja Gojkovic.

On the third day of the visit,Nikolic and Xi will visit Zelezara Smederevo (Smederevo Steelworks), hosted by Aleksandar Vucic.