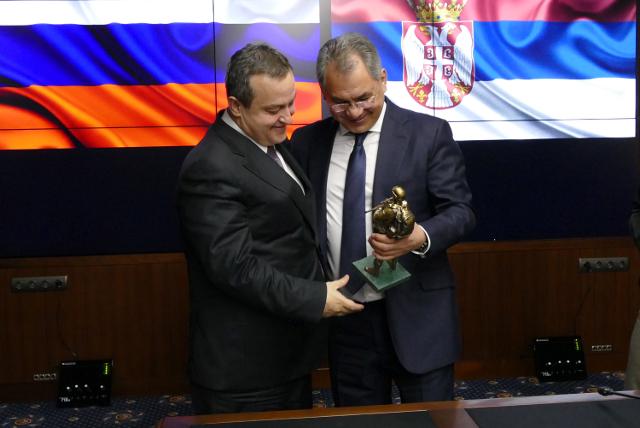 The two officials spoke in favor of strengthening military and military-technical cooperation between their countries, Beta agency reported.

Dacic and Shoigu "discussed the key issues" related to this cooperation, the Russian Ministry of Defense said in a statement.

It added that during "the friendly and constructive" meeting the ministers exchanged opinions on the current problems concerning international and regional security.

"The ministers gave high marks to the level odfRussian-Serbian military cooperation and indicated a series of perspective directions for its development," said the Russian MoD.

Shoigu said that this direction was envisaged during the recent visit of Serbian President Tomislav Nikolic to Moscow and his conversation with President Vladimir Putin.

"Our priority is to realize the agreements reached at the highest level," said Shoigu, and added that his meeting with Dacic confirmed the sides were ready to further develop their cooperation.

The start of the meeting was open to reporters, when Shoigu commended Dacic's role as former OSCE's chairperson-in-office during the war in eastern Ukraine, saying that the Serbian minister "strengthened OSCE's role regarding the Ukrainian issue."

Shoigu also said he and Dacic would discuss extending the training and education of Serbian Army officers, as well as "the upcoming deliveries of military equipment during this year."

He added that he expects Serbia's Defense Minister Zoran Djordjevic in Moscow next month, where he will participate in the 5th International Conference on International Security.

According to Shoigu, this will be a good opportunity to meet Djordjevic, and exchange opinions regarding the key military cooperation issues.

"I hope he will continue the tradition of previous ministers and we count on further development of military and military-technical cooperation," Shoigu said.

The Russian minister noted that the two countries have "a very busy agenda of events this year" and said he hoped Serbian soldiers will be participating "in all events in Russia" including Army Games and the Tank Biathlon.

Dacic said that Serbia is "of course interested in cooperation with Russia in the area of defense."

He described Shoigu as "one of the greatest friends of Serbia and of the Serb people," adding that Serbia "considers Russia to be its natural ally, with whom it has had good cooperation for centuries."

Dacic also thanked Russia for its support over Kosovo.

Dacic, who also as Serbia's first deputy prime minister, is on a two-day working visit to Moscow. He is meeting with Russian Deputy Prime Minister Dmitry Rogozinlater today, and with Russian Foreign Minister Sergei Lavrov on Friday.