"Serbia has no capacity to shelter migrants long-term"

Ivica Dacic said on Tuesday in New York that our country does not have the capacity to be "a long-term, mass shelter for migrants." 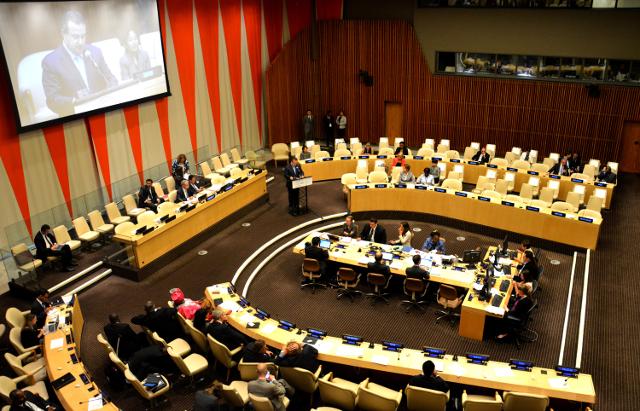 Serbia therefore advocates a comprehensive European and global solution, with fair sharing of the burden, the first deputy prime minister and foreign minister told a high-level meeting of the UN General Assembly on addressing large movements of refugees and migrants.

"We are in the midst of a very serious refugee and migrant crisis, the largest such crisis since the end of World War II, which is not subsiding but is, on the contrary, intensifying in terms of scope and magnitude. Nine months after the decision was reached to convene this Meeting, the situation is even worse and more complex, with no comprehensive solution in sight. Despite serious efforts to address these and other growing challenges, the international community has failed so far to adopt an adequate approach to the resolution of this problem. It is clear that we need to find a solution for the main root-causes of the crisis and to put an end to wars and conflicts that have produced the largest number of refugees," Dacic said in his address, published by the Serbian government's website, and added:

"My country is located along one of the major routes for the movement of refugees, the so-called Western Balkans route. Over the past year and a half more than 700,000 refugees and migrants transited through Serbia. We demonstrated our solidarity and humanity, for which Serbia frequently receives praise from migrants themselves, but also from UN agencies and the international community. We have organized reception centers, accommodation and transport. We have provided food, clothing, healthcare and special care for women, girls and children, as well as for the elderly and sick."

"Our empathy for refugees and migrants and essential understanding of their suffering and predicament stems from the fact that we have been faced with the problem of refugees and IDPs for more than two decades. Our country is even today home to a total of 250,000 refugees and IDPs living in protracted displacement, the largest number in Europe. We have been making tremendous efforts to find durable, just solutions for refugees from the region and for IDPs on our territory who are in protracted displacement," the Serbian minister said.

"The reduction in the number of refugees in the territory of the former Yugoslavia was largely the result of their integration in the Republic of Serbia, which involved over 300,000 people. In this way, Serbia bore the largest burden of a durable solution for the refugee problem. Regrettably, out of 200,000 IDPs, only 4,000 of them or 1.9% of the persons expelled 17 years ago from our province of Kosovo and Metohija have returned to their homes," Dacic said, and added:

"The migrants coming to Serbia arrive from EU countries and strive to reach northern EU members. When northern sections of the route are closed, there is a risk that Serbia becomes a bottleneck for several thousand migrants stranded in Serbia, which is already the case. Currently, there are more than 7,000 migrants and asylum-seekers in Serbia. In coordination with the neighbors along the Western Balkans route we have undertaken measures to prevent irregular migration and suppress the activities of criminal smuggling groups. Although the influx of refugees and migrants has somewhat decreased since March of this year, due to the active involvement of criminal groups, the Western Balkans route is far from closed."

"We do not want to erect walls and we are ready to show solidarity and bear our share of the burden of the crisis. However, as a country with the problem of protracted displacement for more than twenty years, we do not have a capacity to be a long-term, mass shelter for migrants. Therefore, we urge for a comprehensive European and global solution and equitable burden-sharing. The Republic of Serbia made a pledge at the London Conference on Syria in February 2016 and donated EUR 500,000 to UNICEF for the education of children in Syria," the minister said, and concluded:

"Today’s adoption of the Declaration has put in place a political framework for addressing issues of refugees and migrants. What is needed now is that our jointly mobilized political will be translated into action. Serbia is ready to work together on the implementation of goals set out in the Declaration."