Serbia's president says a large and powerful European country has asked Pristina to impose fees on Serbia, with the aim of forcing Serbia to disrupt dialogue. 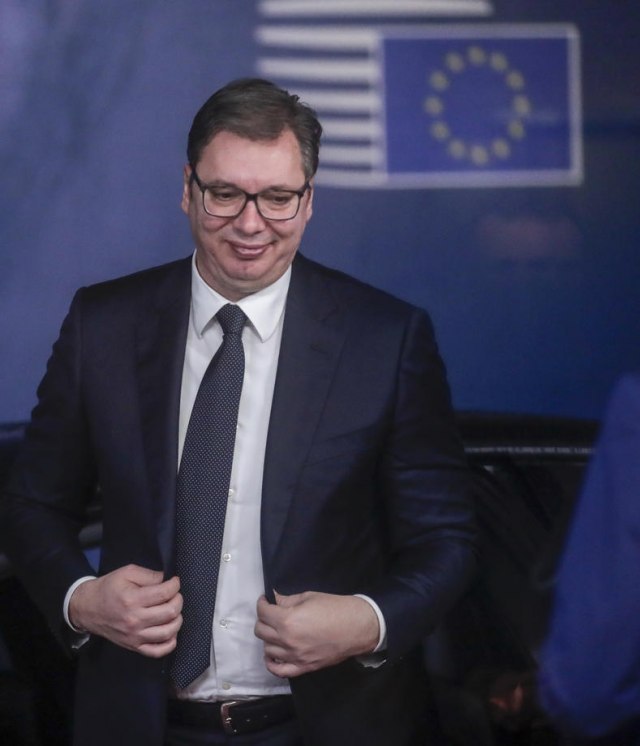 According to Vucic, the dialogue was moving towards a compromise solution.

"It was done to say that Serbia was going out of dialogue and that any plan for Serbia to gain something would be overthrown", Vucic explained on TV Happy show "Cyrillic" last night.

He reminded that the idea of demarcation could be the outcome of a dialogue in which Serbia would get something. "I didn't know it right away, now I know it all. It is one significant and powerful country in question", Vucic said.

He recalled that the whole world rebelled against tariffs, Americans louder than Europeans, because, as he pointed out, one European country wanted it.

He believes that it is no coincidence that officials in Montenegro say they have to have their own church.

Vucic explains that they first attacked Serbian church and Amfilohije, but that the essence is again Serbia and Vucic, and finally, they have NATO support.

He also said that one country especially insists on an energy agreement with Pristina, just to get money, because it is important to them, not the Community of Serbian Municipalities.

He recalled that he had never responded to the "strikes" from the region, that he had never said a difficult word about someone in the region. But any reason to blame Serbia is good, he notes, and so does the encounter with Serbs from the region, after which, he says, foreign journalists ask him for his allegedly controversial statements, and he then reiterated that he respects Bosnia-Herzegovina, adding that he did not rendered the decision of the Constitutional Court of BiH to the detriment of Republika Srpska.

Vucic also noted that Milorad Dodik, when he was chairman of the BiH Presidency, could never go to Brussels alone, but all the presidency members were invited - Dodik, Zeljko Komsic and Sefik Dzaferovic, and now that Dodik is not chairman - then only invite Komsic.

He also referred to Dodik's statement on RS and BiH after meeting with the Serbs from the region in Belgrade, and said that after the meetings, they did not agree on what anyone would say, but Dodik said what he thought appropriate.

"I, as a good host, and as Dodik's friend, it's no secret, I realized in what direction it will go and said that Serbia respects the integrity of Bosnia-Herzegovina, and the integrity of RS within BiH. I did not say a single bad word. However, in Brussels the N1 journalist asks me - "about your controversial statement." Which one? There is no controversial statement of mine", Vucic said.

He added that he (Vucic) is also guilty in the eyes of Croatian journalist, and it does not matter what Dodik said. Vucic said that this is often the case in Zagreb, Sarajevo, Podgorica, sometimes under wraps, and sometimes openly, because Serbia is no longer a punching bag and it is not weak.

"Serbia has its own army today, it has a good reputation, more importantly than the military, it has more money, stable public finances, faster economic growth. They cannot forgive me that success, together with the government, and all those who run Serbia today. That is why this kind of campaign is implemented, and that's what people in Serbia clearly understand and see", Vucic said.