A protest was held in Gracanica the occasion of World Press Freedom Day, organized by the Association of Journalists of Serbia (UNS) in Kosovo. 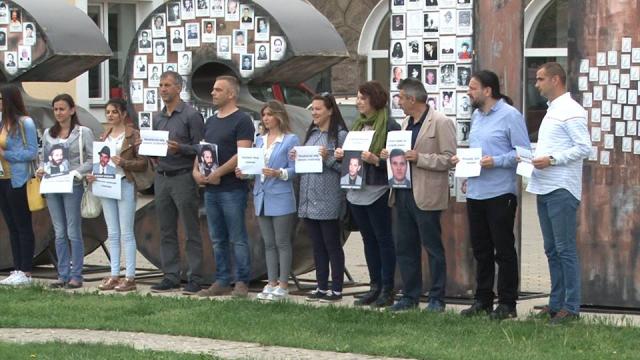 Support for the Serb colleagues was also provided by representatives of the Association of Journalists of Kosovo (AGK), which brings together Albanian journalists. From the protest in Gracanica, journalists went to Pristina where they attended the AGK protest.

"We welcome this May 3 similar to previous years. Our media freedom is endangered, our rights to normal work are endangered. This is nothing new as it is not new that this May 3 once again, those responsible for kidnappings and murders of our colleagues are free. Also, those who by now six times demolished our memorial plaque placed at the site where Djuro Slavoj and Ranko Perenic were kidnapped in 1998 remain unknown and unprosecuted," said UNS in Kosovo President Budimir Nicic.

On the occasion of World Press Freedom Day, he requested that the special war crimes chamber (with seat in The Hague) treat the killed and disappeared journalists as special cases.

"We demand that the Prosecutor's Office in Pristina and EULEX launch investigations into abductions and murders that are not in the mandate of the special court and report about it timely to the public, and that the police, the prosecution and the Pristina court investigate and prosecute all attacks on journalists and their property over the past years," said Nicic.

One of the demands of the UNS in Kosovo is that the Kosovo institutions respect the Law on the Use of Languages ​​in Kosovo and provide translation at all events they organize, especially in the Assembly of Kosovo, throughout the duration of the sessions, and not only when the Serb deputes are in the Assembly Hall.

Petrit Colaku spoke in Gracanica on behalf of the AGK, to send a unison message that "impunity, threats and attacks on our colleagues must stop, while managers and media owners must change the working conditions."

He said his association advocates "to investigate cases of murders and disappearances of colleagues from 1999 to the last case of 2005."

"The apathy of institutions in Pristina has to end and a serious investigation has to be carried out in these cases," Colak said.

Nicic repeated the demands at the AGK gathering in Pristina and announced the holding of protests in front of the Assembly of Kosovo if it continues to to fail to apply the Law on the Use of Languages ​​in Kosovo Institutions, and for that sought the support of Albanian colleagues.