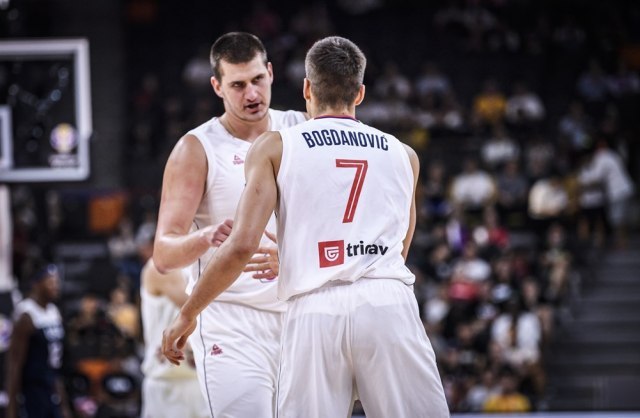 Alexander Djordjevic's selected players played a solid game, with plenty of ups and downs, and in the end, they still managed to record a triumph.

"Eagles" will play with the winner of the game between Poland and Czech Republic for the fifth position on the World Cup.

The most efficient in the winning squad was Bogdan Bogdanovic, scoring 28 points, with four rebounds and six assists, Lucic scored 15, Micic ten, while Jokic scored 9 points, along with 7 assists.

The USA was led by Harrison Barnes with 22 points, Kemba Walker with 18 and Chris Middleton with 16 points.

The Eagles managed to drop as much as 25 points, so there were only four points in favor of Serbia at half-time, with a score 44:40 at half time.

From glitter to despair, this is how our basketball players played in the first half of the game.

In the second half, we haven't witnessed lots of ups and downs in our playing. There were brief series of scoring points on both sides, but our basketball players were up to it, and finally managed to break the Americans' resistance in the fourth quarter.

At the end of the last quarter, Serbia had surplus of 10 points, and the US team was unable to get back. Not that they didn't try, Walker and Barnes hit 2 three points, but that wasn't enough.

The match for the fifth place is on schedule on Saturday, at 2.00 pm CET.

Check out the schedule of today's classification games ⌚️ Who you got? 🤔#FIBAWC #WorldGotGame