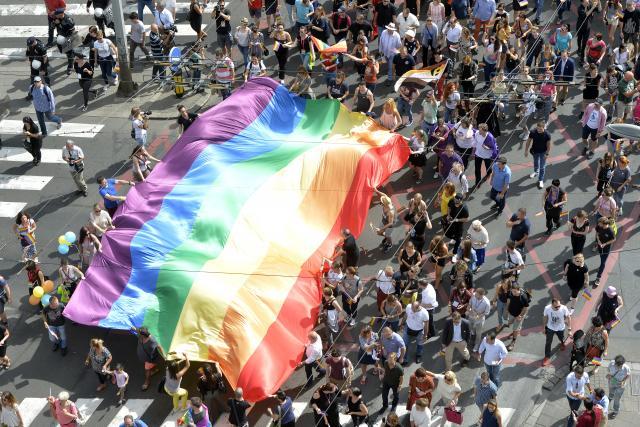 Participants, accompanied by music, included children, and citizens with pets. Some citizens welcomed the parade by waving at its participants from their balconies, while others protested, with one holding a Serbian flag and a banner reading "Sodomy should be a crime."

Boban Stojanovic, one of the organizers, said this was not only a festival of LGBT community's pride, but also of all those who are silent and suffer because they feel helpless.

"15 years ago this was a bloody square during the attempt to hold the first Pride, and look at us now," he said, addressing the participants.

LGBT activists from Norway and Turkey also spoke at the gathering. Officials who took part in the parade included cabinet minister Ana Brnabic, Belgrade Mayor Sinisa Mali, head of Serbia's team for negotiations with the EU Tanja Miscevic, Equality Commissioner Brankica Jankovic, as well as chair of the Committee on Human and Minority Rights Meho Omerovic.

Ambassadors of the EU, the U.S., Germany, Italy, and the head of the UNHCR in Serbia also took part.

Police cordons were deployed along the route where the parade's participants passed, with protective railings set up on several locations. Police officers in riot gear were also seen, along with combat vehicles and members of the mounted police brigade, with a helicopter flying over the center of the city.